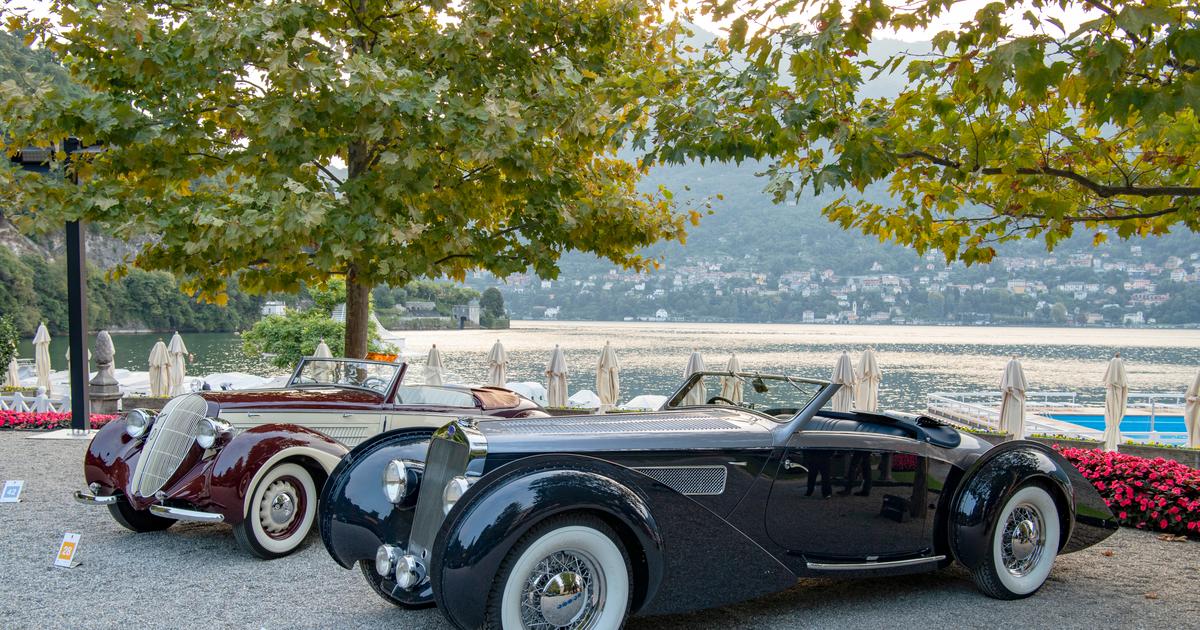 The Villa d’Este is a 16th-century villa in northern Italy which was for centuries a residence of the aristocracy – princesses, marquises, sultans, tsars and Popes have lived there. Since 1873, the villa has been one of the most charming and celebrated five-star resorts in the world, and since 1929 it has held a spectacular annual automotive beauty contest – the world-renowned Concorso d’Eleganza Villa d’Este. The 2021 event, as usual, provided a feast for the senses.

The setting for the Concorso d’Eleganza Villa d’Este is highly appropriate for the cars that are displayed there. In addition to being a resort, it is now an Italian state museum and a UNESCO World Heritage Site.

There’s an irony about the Trofeo BMW Group winner of recent times. The trophy is sponsored by Germany’s BMW Group and is awarded to the overall winner of the Concorso d’Eleganza Villa d’Este. In 2021, the winning car was produced in Italy for the seventh time in succession.

A 1956 Ferrari 250 GT Tour de France owned by American Brian Ross was awarded Best of Show by the Jury and will now attend the final of the 2021 Peninsula Classics Best of the Best Award in Paris next February.

Roll-Royce is on a mission to resurrect coachbuilding, a program it introduced with the exhibition of the first coach-built Rolls-Royce of the modern era, Sweptail, at Concorso d’Eleganza Villa d’Este in 2017.

In unveiling the unique coach–built Boat Tail for its first-ever public appearance at Villa d’Este last Friday, the words of Torsten Müller-Ötvös, the Chief Executive Officer of Rolls-Royce Motor Cars, tell the story most elegantly:

“It is a wonderful privilege to reveal this unique Rolls-Royce to the world for the very first time. Although images have been widely shared, the car itself has not been displayed in public before. The Villa d’Este Concorso d’Eleganza is the perfect occasion, bringing together leading international media alongside knowledgeable motoring experts and discerning luxury aficionados, on the glamorous shores of Lake Como. There is also a pleasing symmetry in that we launched the first coach-built Rolls-Royce of the modern era, Sweptail, at the 2017 event.

“It is a truly historic moment for the marque. We are leading a modern coachbuilding movement that takes the wider luxury industry into an entirely different space, where hyper-personalization and contemporary patronage provide essentially limitless possibilities.”

Boat Tail is a truly hand-built, one-of-a-kind creation, with the bodywork and interior designed and produced to the client’s specification.

One of the stars of the Concorso d’Eleganza Villa d’Este this year was the second coming of the 1971 Lamborghini LP 500.

At the 1971 Geneva Motor Show in March 1971, Lamborghini presented the LP 500 Countach. The Countach was conceived to replace the legendary Miura and wrote a new page in the history of the automobile, both for its technology and design. After three years of development, the LP 500 was sacrificed in crash tests in March 1974 and the remains were disposed of, never to be seen again.

The LP 500 shown on March 11, 1971, immediately became a global phenomena, and photographs of it went viral, being published in major magazines and newspapers around the world. From 1974 to 1990, 1,999 Countachs were produced in five different series, with many millions of posters of the car resplendent on the bedroom walls of an entire generation.

At the end of 2017, a classic car aficionado and important Lamborghini customer whose youth was touched by the Countach, asked Automobili Lamborghini’s Polo Storico if there was any possibility of creating a reconstruction of the Countach LP 500, a legendary model now known only through photographs of the time.

At Concorso d’Eleganza Villa 2021, the second coming of that car was presented. It was entered in the class reserved for concept cars a full half century after it first saw public display. We have no idea what the cost might be to undertake a passionate reconstruction project as far-reaching as this, but suggest it would be many millions of dollars. Lamborghini’s Polo Storico spent over 25,000 hours of work on the project on behalf of that VIP collector.

We’ve done our best to capture the elegance of the cars entered in this year’s event, with the award winners included in the photo gallery.

Jeff Koons has entered the building

Jeff Koons looms large in the art world viewed from any perspective. As the value of an artist’s creations exponentially increases following their death (and the capping of “supply” in the demand/supply equation), Koons stands out as a dynamic force of nature for a very long time, given he is still producing at his creative best. He reclaimed the title of the highest price paid for an artwork by a living artist in May 2019 when his Rabbit sold for $91.1 million at a Christie’s auction.

BMW already has a strong affinity with automotive art in several dimensions; it is heavily involved with the sponsorship and logistics of the running of Concorso d’Eleganza Villa d’Este and it has been running the BMW Art Car program for many decades, which has seen collaborations with the like of Alexander Calder, Andy Warhol, Roy Lichtenstein, Robert Rauschenberg, David Hockney and John Baldessari.

Koons has previously been involved in the BMW Art Car Program in 2010 when he designed a BMW M3 GT2, but his attendance at Villa D’Este signifies the beginning of something much larger as Koons is creating a limited-edition collectable car collection for BMW based around the BMW M850i Gran Coupé, with his “8X Jeff Koons” project to be sold as collector’s editions following the launch at Frieze Los Angeles in February 2022.

Koons and BMW appear to be playing at the point of intersection of the giant tectonic plates of the collectibles marketplace, and while the collectible car market is massive, the total sales of Monterey Car Week are usually much less than the totals achieved at Sotheby’s and Christie’s high-end art auctions.

It will be fascinating to watch this play out. Please form an orderly queue to the right, with a blank cheque from your pension fund.

One of the most prestigious awards in the world, the Concorso d’Eleganza Villa d’Este is one of the eight concours events that provide the finalists for the Peninsula Classics “Best of the Best” Award, which will be awarded in Paris next February.

This award for Best of Show is decided by the Jury and this year was won by a 1956 Ferrari 250 GT TDF Coupé, with coachwork by Pininfarina. The car’s current custodian is Brian Ross of the United States.

The Coppa d’Oro Villa d’Este is the Best of Show as voted by the attending public, and this year the public conferred the award to a 1930 Lancia Dilambda Serie I Drop Head Coupé.

The exquisite one-of-a-kind Italian classic is owned by well-known enthusiast, restorer and Lancia expert Filippo Sole. Despite now being in its tenth decade, the car is both beautiful and quick, with a four-litre V8 engine producing 100 hp. The motor car presented at the Concorso d’Eleganza Villa d’Este 2021 was styled at London-based coachbuilder Carlton Carriage as a unique one-of-one drop head coupé.

The Concorso D’Eleganza Design Award For Concept Cars & Prototypes is chosen by Public Referendum, and remarkably, three of the five cars contesting the class were electric. That’s a first and a definite sign of the times, particularly considering the great beauty required to be a participant at Concorso D’Eleganza Villa D’Este.

The two EVs that didn’t win a gong were the GFG Style Vision2030 (above) and the Hispano Suiza Carmen Boulogne (below).

The winner of the category was, not surprisingly, the Automobili Pininfarina Battista Hyper GT.

Authentic original patina is now the height of fashion at an event such as this, hence winning this award is a much sought-after honor. Swiss owner Jürg Haas went to some quite remarkable efforts to dress for the role, complete with chauffeur in his 1920 Rolls-Royce Silver Ghost 40/50 High Speed Open Tourer with coachwork by Barker. That’s a genuine centurion automobile. Bravo.

The award for the best preserved post-war car went to the 1968 Howmet TX (Turbine eXperimental) Coupé with coachwork by Bob McKee, and owned by Egon Zweimüller of Austria.

The Trofeo Automobile Club Como goes to the car driven from farthest away each year, and some of the winners of this trophy have indeed travelled a long way.

The Trofeo Automobile Club Como in 2021 was awarded to Ian Maxwell-Scott who drove his 1965 Aston Martin DB5 Convertible Touring Superleggera all the way from England.

The Trofeo BMW Group Classic is awarded each year to the most sensitive restoration and in 2021 it went to the 1935 Fiat 508 CS ”Balilla Aerodinamica“ Coupé of Mark Geessink (NL).

Awarded for the best iconic car of the show, the Trofeo Vranken Pommery went to the 1989 Ferrari F40 Coupé of Christiano Michelotto, (IT).

Awarded for the most exciting design, the Trofeo Auto & Design went to the 1995 McLaren F1 Coupé, of Ahmad Gozal (AE).

The class winner in Class A (Twentieth Century Style) was this 1934 Lancia Astura Torpedo GS Open Tourer, with coachwork by Viotti. The car was displayed by Anthony MacLean (CH).

Class B | Developing the Theme: Space, Pace and Grace

The class winner in Class B (Developing the Theme) was this 1938 Delage D8-120 S Cabriolet, with coachwork by De Villars. The car was displayed by Fritz Burkard (CH).

The class winner in Class C (Showroom Showdown) was this 1955 Mercedes-Benz 300 SL Gullwing Alloy Coupé with coachwork by Sindelfingen, owned by David MacNeil (US).

The class winner in Class D (Granturismo all´Italiana) was this 1953 FIAT 8V Coupé with coachwork by Vignale, owned by Jan de Reu of Belgium.

The class winner in Class E (Big Band ´40s to Awesome ´80s) was this 1956 Ferrari 250 GT TDF Coupé with coachwork by Pininfarina. The car was displayed by Brian Ross (US).

Class F | A Passion for Perfection: Celebrating 90 Years of Pininfarina

The class winner in Class F (90 Years of Pininfarina) was this 1960 Ferrari 250 GT California SWB Spyder. The car comes from the Destriero Collection (MC).

Class G | The Birth of the Supercar: Latin Style Landmarks

The class winner in Class G (The Birth of the Supercar) was this 1978 Lamborghini Countach LP 400 S Prototype Walter Wolf Special Coupé with coachwork by Bertone, and owned by Shinjiro Fukuda of Japan.

Class H | The Next Generation: Hypercars of the 1990s

The class winner in Class H (Hypercars of the 1990s) was this 1993 Isdera Commendatore 112i Coupé Isdera, and owned by Phillip Sarofim (US).