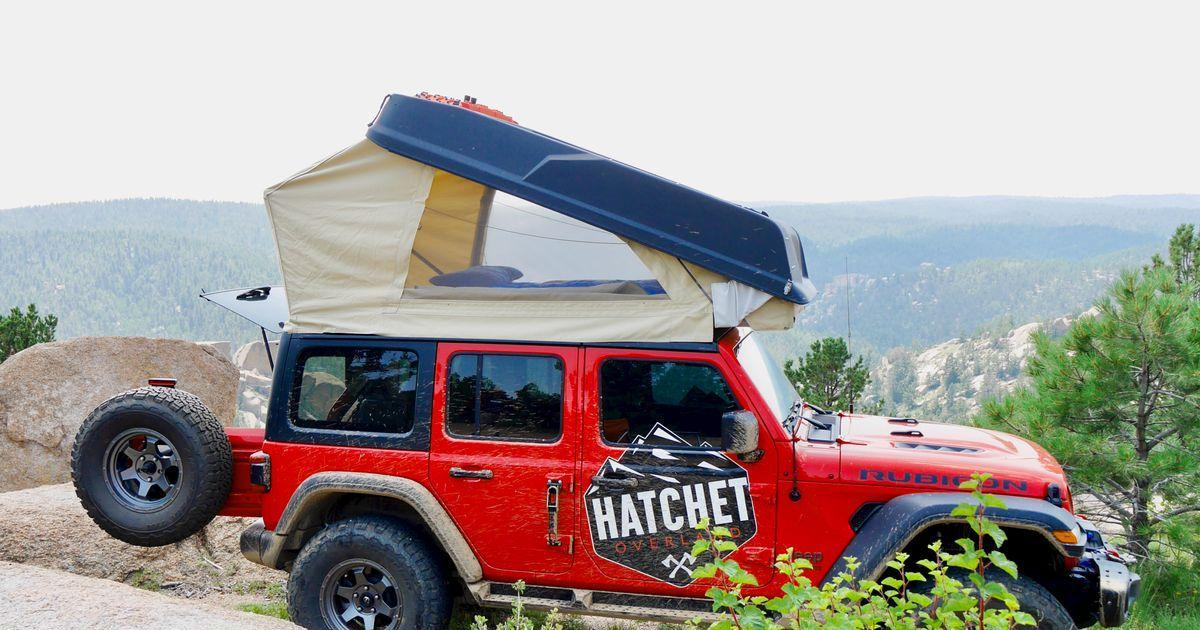 Colorado’s Hatchet Overland is preparing to enter the fray of go-anywhere micro-RVs built directly into the world’s most capable 4x4s. Its lightweight Jeep Wrangler pop-up adds less than a foot of ride height, sets up in a minute flat, and pops up and out to create a comfy sleeper roof and standing height interior inside a four-door Jeep Wrangler. So after venturing off the map over the roughest terrain on the mountain, off-road explorers have a cozy place to retire.

When we strolled past the Hatchet Overland Jeep Wrangler Rubicon at Outdoor Adventure Expo back in June, that big, black helmet identified it as something quite different from the average aftermarket Wrangler build.

Unfortunately, the rig was completely unmanned at the show and had no useful accompanying information beyond the “Hatchet Overland” branding. We did get to see it with the roof popped, but still no staff or info. Subsequent internet searches revealed less about Hatchet Overland campers and much more about the many camping hatchet options available ’round the world.

Fast-forward two months, and we now have some more information thanks to Hatchet Overland’s more formal showing at Overland Expo Mountain West this past weekend, a show that took place not far from the company’s hometown of Denver. Hatchet is working on its third prototype, smoothing out the kinks on the way to bringing its fiberglass pop-top camper kit to market.

The Hatchet pop-up roof is configured specifically for the Wrangler JL Unlimited and will not fit two-door JLs or older Wranglers like the JKU. Rather than merely popping straight up, like other Wrangler pop-tops and pop-up camper vans, the Hatchet tent pops up and extends back via a rear pole frame, similar to the pickup-back Harker EDC that also featured at Outdoor Adventure Expo. This frame extension creates a larger tent space, complete with four ventilation windows with zip-up canvas shades.

Set-up happens in as little as a minute with help from the integrated gas struts, while breakdown takes roughly two minutes, according to Hatchet.

The Hatchet camper is similar to the Ursa Minor J30, which offers 6.5 feet (198 cm) of standing height, but Hatchet aims to keep its weight below 200 lb (91 kg). The J30 Wrangler JLU pop-up kit weighs in at 270 lb (122 kg) and adds the same 10 inches (25 cm) over stock Wrangler height, according to Ursa Minor’s spec sheet. Contributing to the fast, light design, Hatchet opts for an Exped MegaMat 4-in (10-cm) inflatable/foam sleeping pad rather than the typical folding foam mattress.

Update: Ursa Minor founder John Gish emailed us with a clarification on the J30’s net weight: “The J30 is a complete replacement top; the 270 lb is the camper ‘as shipped’ in case you want to pick up and install it. The Jeep OEM top weighs about 120 lb (54 kg) for the JL model, but this top is removed when installing our camper. The net weight change then is 150 lb (68 kg) increase over stock, though it can go up to another 20 (9 kg) +/- depending [on] options selected.”

Hatchet doesn’t mention an option for hauling gear on its the roof, the way Ursa Minor offers with available cross bars, but it has created a recessed roof design for neatly mounting one or two 100-W solar panels and a set of traction boards. The recessed design is meant to help prevent snagging on overhead tree branches.

Hatchet seems less concerned about competing with other pop-up Wrangler micro-camper hardware, like the J30 or American Safari JXL, and more focused on presenting an alternative to the popular Wrangler-top roof rack + rooftop tent combo. It claims that its design sits a few inches lower than the height of a racked-up rooftop tent while also saving weight, but that will ultimately depend upon the tent and rack solution against which one compares — specific rooftop tent models have gotten pretty lightweight and low-profile in recent years.

Hatchet has not yet listed pricing but is hoping to start production later this year. It plans to source fiberglass, canvas and hardware components locally from Colorado and neighboring Utah, and assemble the pop-ups at its Denver HQ before later branching out with a dealer/installer network.