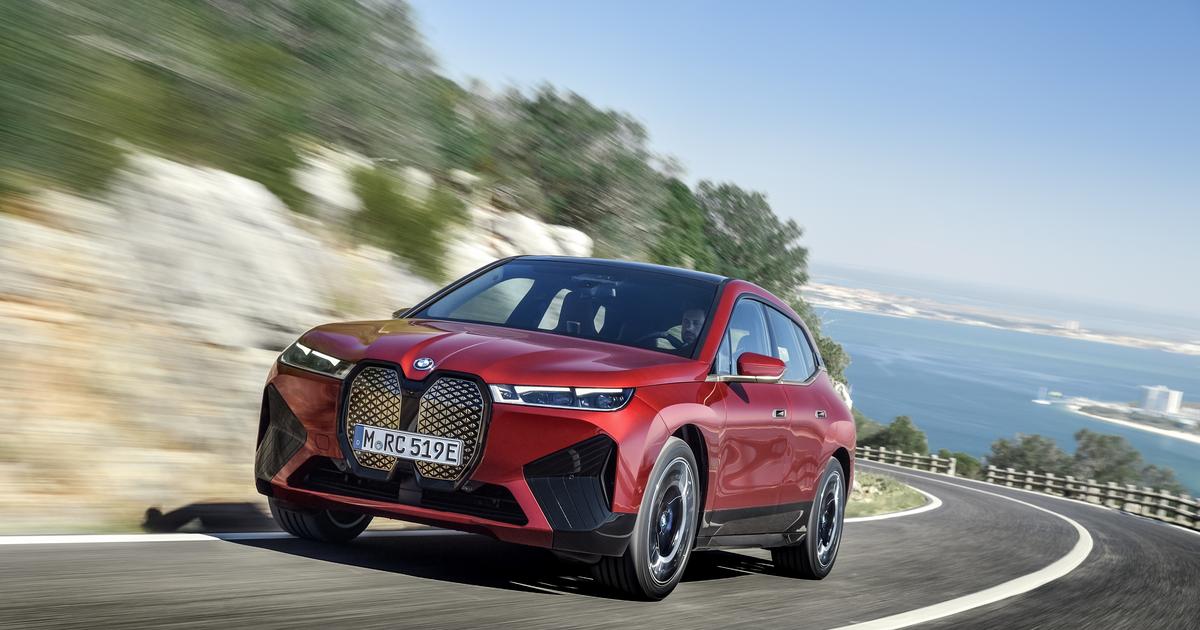 Two years ago, BMW rolled out the Vision iNext as a wheeled laboratory of next-gen autonomous and HMI (human machine interface) technology. Nothing about it felt particularly imminent, save for the electric powertrain that BMW didn’t actually detail. Today, the iNext turns into the iX, a big step toward a production 300-mile (483-km) electric SUV on its way to market next year. With the huge grille that has become a head-scratching hallmark of modern BMW design, the new technological flagship is ready to eat the competition – perhaps, literally.

We last saw the futuristic electric iNext SAV (that’s “sports activity vehicle” in BMW’s persistent parlance) being put through its paces in the Swedish Arctic in February 2019. It was wrapped in camo as tightly as a Christmas present dropped from Santa’s nearby sleigh, but you could already tell it was shedding its odd concept lines in favor of a more polished production skin – regular wheels, exterior door handles and less of a glowing violet aura.

BMW takes a step closer to full production reality in showing the iX, a sort of middle step between the iNext and next year’s production SUV, which will presumably get a more specific name or number so as not to be confused with the iX3. Today’s iX looks quite production-ready and stretches roughly the same 194-in (493-cm) length and 79-in (201-cm) width as the X5, with the 66-in (168-cm) height of the more coupe-like X6.

The iX’s stance seems slightly more upright than the iNext’s, supported by the B-pillars needed to hang the non-coach rear doors. The impossibly thin, wiry headlamps have been opened up a little, but BMW promises they’re still the slimmest headlights to ever feature on one of its series-production cars.

BMW refuses to take the very available opportunity to hem in the iNext’s massive maw, despite readily admitting that the EV doesn’t need very much cooling at all. Instead, the huge standing double-kidney seen previously on the likes of the new 4 Series lives on. Rather than air-sucking mesh, that big hunk of face hides a series of radars, cameras and other sensors behind a solid transparent panel. Its unfortunate hugeness is further accentuated by ridges that extend up the hood from each kidney, creating a ravine between them to swallow the BMW emblem whole. No thank you.

The iNext concept featured its most dramatic elements on the inside of the doors, and here, too, BMW sands things down to near-production form. To no one’s surprise, the amorphous rear bench with touch controls shining through its jacquard cloth is gone, replaced with a very standard three-seater with headrests.

Still alive and kicking is the theme of “shy tech,” taking the form of heated surfaces, concealed speakers and a head-up projector integrated subtly into the hovering curved instrument panel/infotainment widescreen. Likewise, the dashboard and center console house but slim HVAC vents, having been stripped of the usual physical controls. BMW centralizes what controls are left on the steering wheel and a center control panel with finger-sized gear rocker switch, transparent dial, and a few other select buttons and switches.

The iNext concept didn’t debut with powertrain specs, but BMW says that the production car will use a 500-hp (373-kW) pair of electric motors and a floor-mounted high-voltage battery pack surpassing 100-kWh. It believes the configuration will push the car past 374 miles (600 km) on the WLTP cycle, racking up more than 300 miles (483 km) on the EPA FTP-75 test. It also throws out a sub-5-second 0-62 mph (100 km/h) estimate. A lightweight structure based around a “carbon cage” and aluminum space frame and an optimized 0.25 drag coefficient contribute to those numbers.

The iX will be capable of DC fast-charging at up to 200 kW, and BMW says the battery will charge from 10 to 80 percent in under 40 minutes. Those looking for a shorter charge will be able to zap the battery with about 75 miles (120 km) during a 10-minute pit stop. Meanwhile, 11-kW home wall box charging will be an overnight job, taking a little shy of 11 hours.

The iNext/iX has been billed as BMW’s cutting-edge next-leap autonomous vehicle for years now, and while that won’t mean full Level 5 robo-driving, the iX promises to feature the heavy-duty computing power and AI to push forward with a more automated driving experience.

“The iX has more computing power for data processing and more powerful sensor technology than the newest vehicles in our current line-up, is 5G-capable, will be given new and improved automated driving and parking functions, and uses the high-performing fifth generation of our electric drive system,” explains BMW board member Frank Weber.

BMW revealed the iX as part of this week’s #NEXTGen 2020 event. The second annual #NEXTGen takes on a digital format this year, featuring a variety of online reveals, presentations and discussions.

BMW plans to begin iX production at its Dingolfing plant in the second half of 2021. The high-tech e-SUV will be among the 25 electrified models the company plans to have in production by 2023.