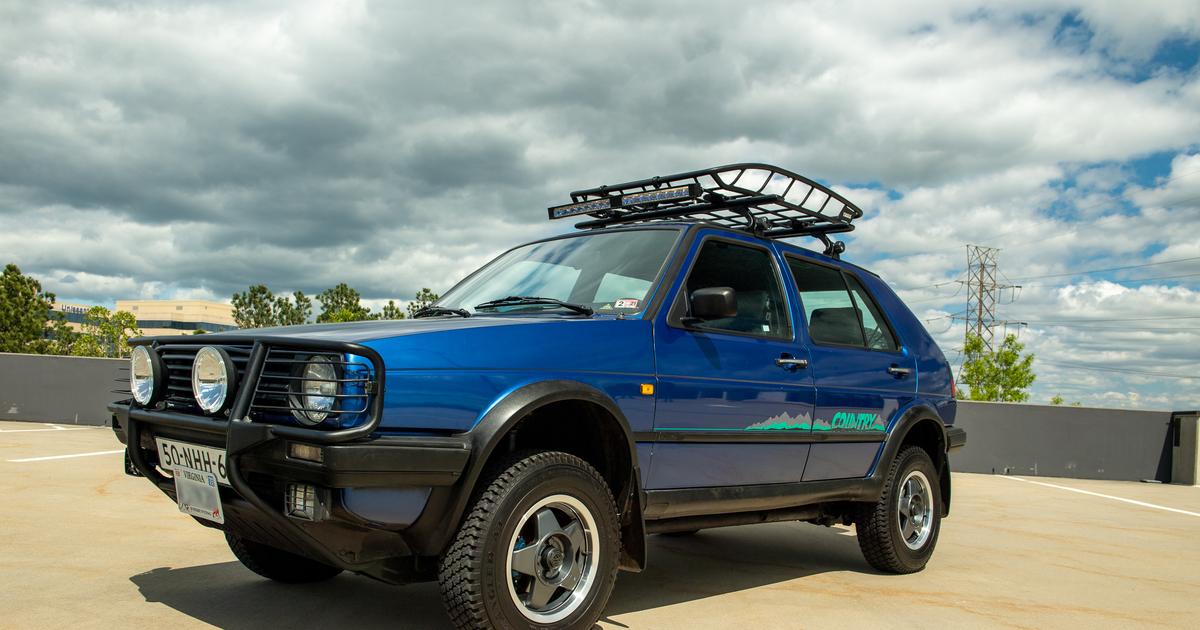 Volkswagen presented a throwback this week recalling the days of the early 90s when it actually offered a towering, rolling fortress-like factory Golf that very much looks today like a SEMA project. For a short time, Volkswagen worked with the off-road masterminds at Steyr-Daimler-Puch to create this absolute beast of a hatchback, complete with near-5-in lift, skid protection, and loads of tubular metal below and over the skin.

A great thing about being an auto journalist is constantly coming across amazing vehicles you’ve never seen before, whether it’s a brand-new reveal, rare classic or just a regular passenger car outside your home market. Only several years ago, I saw the Lada 4×4 in person for the first time parked in a quiet Swiss public lot. I spent the next 10 minutes walking around, kneeling down, getting on my back, and ogling its every inch and angle with eye and camera lens before realizing I probably looked like a criminal casing the object of a forthcoming crime, in a foreign country. After an instinctive look over the shoulder, I scurried off and was disappointed when the Lada was gone upon returning the next morning.

What had most fascinated me about the Lada was that it reminded me of a burly, lifted 4×4 version of the Volkswagen Rabbit my parents owned when I was a kid. Such a vehicle would have seemed an embarrassment at the time, as the baby-blue ’82 Rabbit that auto-honked around corners in its later days was hardly the coolest car in which to shuttle around as a pre-teen in the early 90s. But as an adult with a love of weird off-roaders from gigantic to tiny, and a nostalgia for cars of my formative years, it was a grand vision.

So it was quite exciting learning this week that there actually exists a vehicle much closer to that 80s Rabbit off-roader, a DNA-certified Rabbit (US-badged Golf MK1) offspring that’s even more impressive to behold. And it actually came to life around the same time I was ducking my head down low in time to the always-embarrassing, ever-spontaneous VW honk-steering.

The year was 1990, and car buyers were warming to the idea that rough-riding, dust-spewing enclosed pickup trucks could be gentrified into proper family haulers, a sportier alternative to the station wagon or minivan called an SUV. That vehicle would take over the market as the years progressed, but in the decade’s infancy, automakers were still experimenting with the formula that would make just the right blend of all-road freedom and everyday driving.

The formula was not the Golf Country. The car would not be a breakthrough, stepping stone or even footnote in the history of the smaller, car-based style of SUV households the world over now know as the crossover. It had the timing, coming a few years before Toyota introduced the segment-launching RAV4, but a thoroughly overhauled, high-riding Golf hatchback that looked like it came out of a Southern California off-road mod shop simply was not a vehicle for the masses. It lasted two model years.

Volkswagen was spurred on by the strong response it received to the ruggedized Golf MK2-based Montana concept it showed at the 1989 Geneva Motor Show, and it made a decision that seems unfathomable in today’s world. It went ahead and green-lighted a production-spec Montana, slapping on the Golf Country name.
Unlike the off-road concepts-turned-production editions we tend to see today, the Golf Country was not a watered-down Montana with little more than special graphics and larger wheels and tires. It was the real deal: an angry, little buggy prepared with help from one of the world’s foremost experts in off-road vehicle building.

The novelty the Country brought to the Golf line wasn’t its all-wheel drive, which was already available on the Golf in the form of the Syncro system that Volkswagen developed in conjunction with Steyr-Daimler-Puch and launched on its delightfully-80s T3 vans five years earlier. It was all that other kit that Steyr-Daimler-Puch added from the comfort of its Graz, Austria factory, taking delivery after Volkswagen manufactured the base Golf in Germany.

Steyr-Daimler-Puch’s heavy lifting, figuratively and literally, came around the wheels, where it added in tubular subframes to boost suspension by a full 4.7 in (12 cm), raising total ground clearance up over 7 in (17.8 cm). It was a hell of a lot of clearance for a Golf, but still left plenty of potential for grinding important mechanicals against rocks and bumps below. Underbody protection was added in to protect those vitals, while front and rear bumper bars were secured over top the body. A rear spare tire-carrier and front off-road auxiliary lights were among the other conspicuous parts of the 438-component modifications package that separated the Country from the average Golf Syncro.

Volkswagen recalls the ride of the Golf Country as velvety smooth over the inevitable bumps and ruts of non-paved road, the revised low gearing adding a bit of pep to the underpowered 97-hp 1.8-liter four-cylinder. For a little more thrill, the Wolfsburg Edition brought on an uprated 16-valve GTI-spec engine to run the show. Not surprisingly, the car’s tall suspension resulted in body roll so substantial even Volkswagen can’t erase it from its fond recollections 30 years later.

Volkswagen built a total of 7,735 Golf Country models in 1990 and 1991. Though the car was legal for import, VW says only a handful made it to the US … which makes me feel just a little better about never having seen one in the wild. Golf Countries are not totally absent from the US today, though, as one modified model still wearing “Montana Green” paint and vibrant “Country” graphics sold on Bring a Trailer just this past January for $12,600 … a steal if ever we’ve seen one.