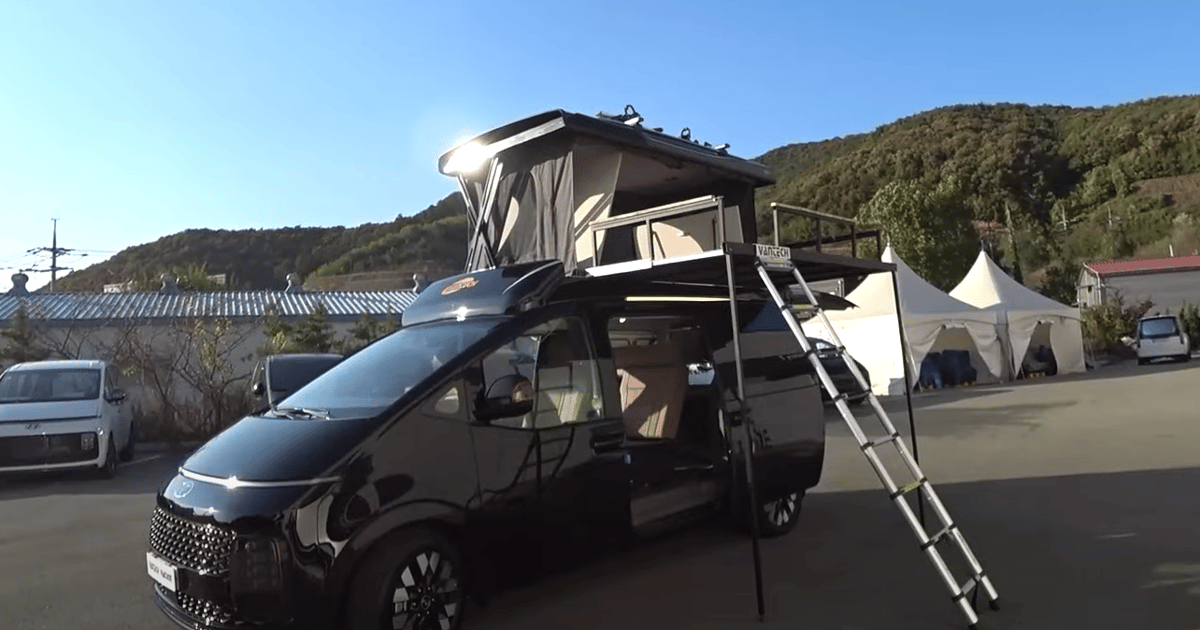 When Hyundai shattered the boring-van mold with the futuristic styling of the all-new Staria earlier this year, we couldn’t help but daydream about how cool a Staria camper van would be … the perfect placeholder as we await VW ID Buzz camper vans. Hyundai itself was thinking this way, too, mentioning right off that Staria camper vans would be on the way. Now they’ve arrived, as Korean conversion shop Vantech has developed the all-new Raccoon L – a small camper that’s notable not only for being one of the world’s first Staria camper vans, but also for a unique layout with electric pop-up sleeper roof, slide-out sundeck and swing-out tailgate microwave.

It’s no surprise Vantech emerges out of the gate as one of the first Staria camper van builders, because it’s long specialized in camper vans built atop the Staria’s predecessor, the Starex. Vantech took delivery of a Staria back in May, just weeks after Hyundai announced all the details, and rather than merely transferring an existing Starex Raccoon package over to the new van, it got creative with some very interesting features.

The Raccoon L package starts out simple enough inside the van cabin, combining a fold-out sleeper bench and swivel driver-cab seats into a comfortable vehicular shelter. The dual-seat rear recliner bench adds a little extra comfort and luxury over the average camper van bench, reclining and dropping flat at the push of a button. Push-button window tinting adds a clean, hassle-free form of privacy, eliminating the need for curtains or blinds.

The real fun doesn’t get started until you push the deploy button for the electric-lift roof, though, watching it slowly rise to form. Instead of the wedge-style pop-top of Starex Raccoon models, Vantech uses a scissor-lift system to raise the entire roof to full height, increasing interior volume. A sleeping platform supports a two-person mattress, and folds out of the way during the day to clear out standing room inside the van.

Usually that’s all you get (or need) from the upper level of a camper van, but the Raccoon L hides a fun little secret in the form of a slide-out deck that extends out over the side, accessed through the tent door of the pop-top or via an attachable outdoor ladder. The deck creates the perfect space to enjoy a morning cup of tea, an afternoon tanning session or an evening sunset. Hang canvas panels around the lower edges, and the deck doubles as the roof of a privacy tent that makes a natural changing and toilet room.

When closed, the terrace is housed in the pop-up roof superstructure, its adjustable-height support legs and flip-up safety rails all neatly folded away.

Vantech keeps the van interior roomy by foregoing a central side kitchen in favor of a tailgate galley. Flip the tailgate open, and you’re greeted with a large dual-zone fridge/freezer and a cutting-board-topped plumbing unit with sink/shower sprayer and attachable collapsible sink basin.

The kitchen does not include a built-in stove, leaving campers to rely upon a portable stove or grill, but it does include a unique option for cooking: a microwave in a swing-out upper console that also has a glass-faced cupboard. When not in use outdoors, the swing-out closes and locks inside the tailgate, allowing the microwave to be used from inside the van.

Both the kitchen block (minus the microwave swing-out) and rear van bench are affixed to floor rails, and can easily slide forward to create more rear cargo space for luggage and gear. Sandwiched between the kitchen block and the rail-mounted sliding base, Vantech installs a slide-out worktop/dining table.

We don’t have pricing information for the Raccoon L, but we do know Vantech offers highly customizable camper van designs, starting with Staria packages much simpler than the fully loaded L with slide-out deck and multiple annex tents. Vantech has been using the L to show off the full camping potential of the new Staria at RV shows around South Korea, including the Suwon show this past weekend.

The Vantech video below is in Korean, but it does provide a nice walkthrough of Raccoon L features that’s easy to follow visually. Another video from Camping Empire (also Korean) provides an even more complete look at the Raccoon L, showing its equipment being deployed and used rather than already all set up at a trade show.