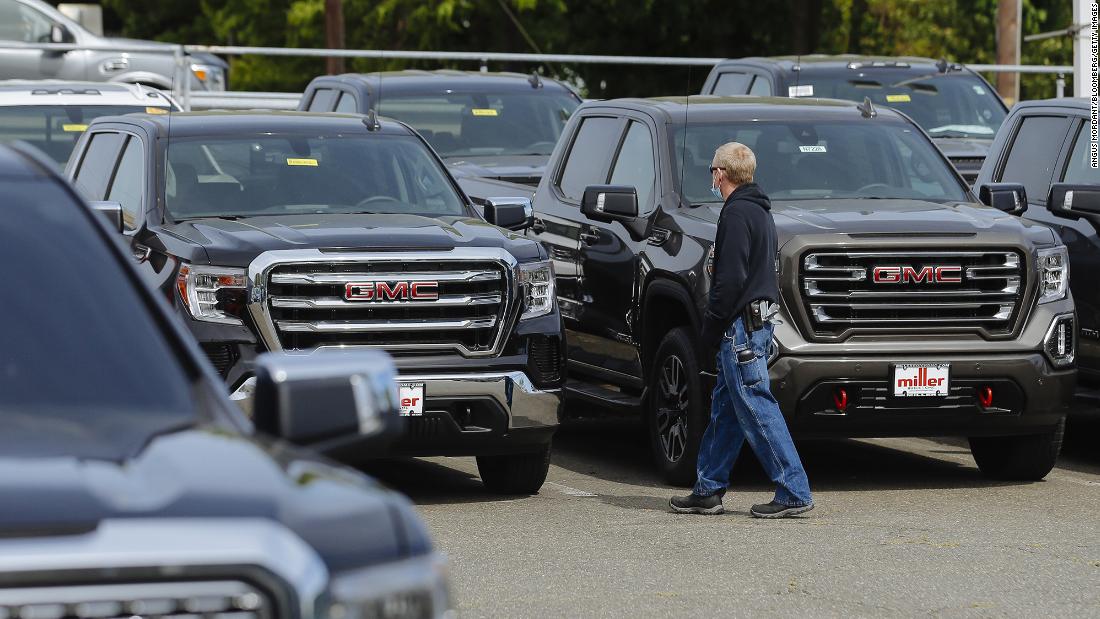 “When you look back to where we were in March and how dismal things looked, it’s incredible how strong the year ended,” said Michelle Krebs, senior analyst at AutoTrader.

GM made the announcement Tuesday alongside a release of its own fourth-quarter sales figures.

It doesn’t mean that auto sales are all the way back: Fleet sales, which typically make up about 20% of overall US sales, are still way off, GM said. That’s especially true for sales to rental car companies, which account for roughly half of fleet sales.
At GM (GM) specifically, fourth-quarter sales were up nearly 5% from a year ago — but it’s not a fair comparison, as GM’s fourth quarter 2019 sales were impacted by a prolonged strike at the automaker. GM’s full-year sales were down about 12% from 2019.
But Toyota (TM) also reported US quarterly sales rose 9% compared to a year ago. Toyota traditionally has not depended as much on fleet sales as some of its rivals. For the full year its sales were down 11%.

GM said its average transaction price in the fourth-quarter was a record $41,886. The full-year average of $39,229 also set a record.

GM also said car buyers are spending more on the vehicles they are buying, choosing more expensive models such as larger SUVs and upgrading to more expensive option packages — all good news for automakers. The strong retail numbers also mean the automakers didn’t need to offer as much in terms of incentives to attract buyers.

Krebs said that car sales were boosted by the the fact that many Americans who have been able to keep their jobs have not had their incomes hurt by the pandemic. But with widespread travel and dining restrictions, many of those consumers spent money on other things, such as home improvement or new vehicles. Buyers were also helped by low interest rates which reduced the cost of car payments.

There are also some workers who relied on public transit or ride hailing services in the past who now prefer to have their own vehicle because of concerns over the possible spread of the Covid-19 virus.

But for the millions who have lost jobs, or had their incomes cut by the recession, a new car is more out of reach than ever due to rising prices. Automakers are now offering fewer models that cost less than $30,000, Krebs said. That will continue to be a headwind for car sales going forward, and will likely prevent the industry from reaching the 17 million US car sales mark it hit in 2019 any time soon.

“The auto industry is a perfect illustration of the K-shaped recovery,” Krebs said, referring to the gap between gains in the upper end of the market and continued tough times for those with fewer resources.

Other automakers are due to report fourth-quarter US sales later Tuesday or Wednesday. Those companies are forecast to also report stronger sales than in the second and third quarters, but many will see a drop compared to a year ago, because unlike GM, their fourth quarter 2019 sales were not impacted by a strike.

GM’s sales rose 4.8% in the fourth quarter in an otherwise dismal year