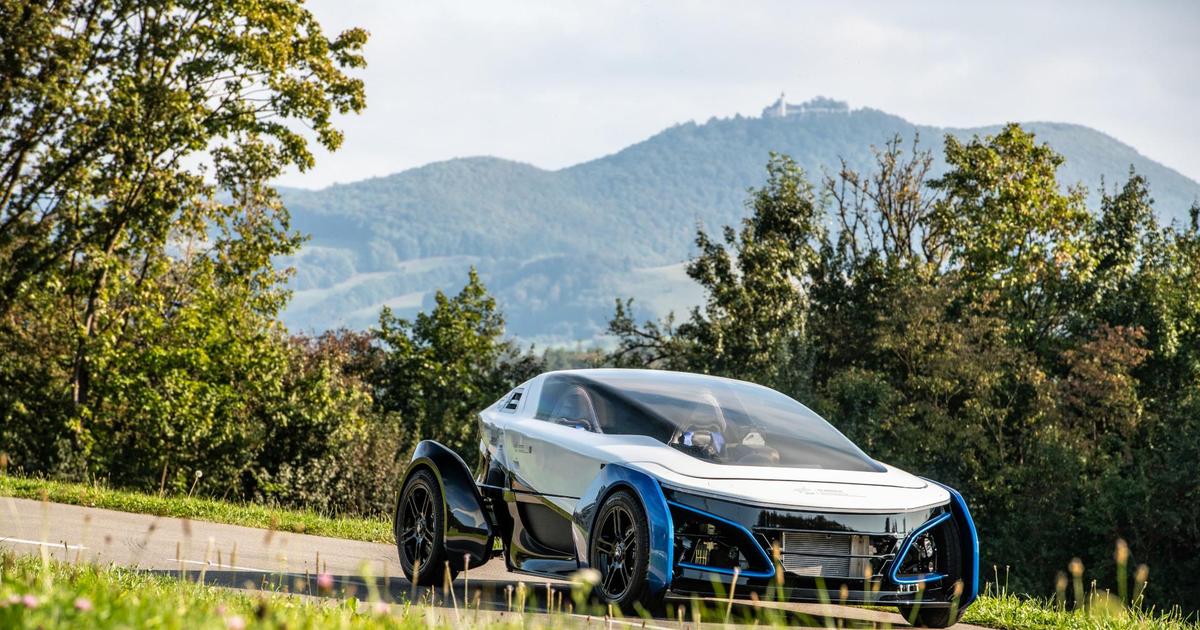 A cleaner, zero-emissions fuel cell-electric powertrain is one way of lessening a vehicle’s impact, and cutting the vehicle’s weight so that the powertrain can push the vehicle farther every fill-up is another. And with less weight, you can shrink the powertrain, which lessens weight even more. That’s the cycle in which the German Aerospace Center (DLR) is operating with its Safe Light Regional Vehicle (SLRV). The eye-catching prototype uses a small fuel cell/battery-based electric powertrain and ultralight metal-foam structure to serve as a capable mobility solution in the city and beyond. And it looks much cooler than the average green car, too.

The brief behind the 12.5-foot (3.8-m) SLRV was to create a lightweight, safe and affordable vehicle – a trio of adjectives that reads like a “choose any two” scenario. The metal-foam construction serves as the backbone of the design, featuring in the front and rear crumple zones that protect critical vehicle components and in the structural ring that wraps the pod-like two-seat passenger cell to deliver energy-absorbing impact protection. The entirety of this foam-sandwich structure weighs a mere 199 lb (90 kg), contributing heavily to a total vehicle weight that dips under four figures at 992 lb (450 kg).

DLR continues its weight-saving efforts with the powertrain, a combination of a small fuel cell, small battery and dual-motor rear electric drive. The agency says the fuel cell/battery setup weighs less than a conventional battery. Using hydrogen from a 39-L (3.5 lb at 700 bar) pressurized tank in between the seats, the fuel cell puts out a continuous 8.5 kilowatts, and the battery kicks in extra power up to a system max of 25 kW to increase acceleration. The combination delivers a range up to 249 miles (400 km) and speeds up to 75 mph (120 km/h). Meanwhile, waste heat from the fuel cell gets repurposed as cabin heating, insulated in cold weather by the efficient thermal barrier of the sandwich structure.

The SLRV meets European standards as an L7e heavy quadricycle, and DLR imagines it finding use as a private commuter car, shuttle between transportation hubs and car-sharing solution. The agency believes the rapid-refueling capability of the hydrogen system makes it ideal for regional journeys between the city and suburbs, hence the name. The project team estimates that the car would retail for as little as €15,000 (approx. US$17,700) and enjoy a lifespan of roughly 186,000 miles (300,000 km), making it an affordable, efficient mobility solution.

DLR introduced the first working SLRV prototype about a year ago and showed it again at last week’s IAA Mobility event in Munich, alongside the boxy U-Shift modular urban transporter. The SLRV serves as part of the agency’s Next Generation Car (NGC) project, which aims to identify and develop technologies to support the future of city and intercity transportation and to optimize associated manufacturing technologies. DLR isn’t sure the SLRV will make it to the market as a full vehicle, but it does expect some of the project’s technologies to find their way into next-gen vehicles.