The most reliable car brands on the American market in 2020 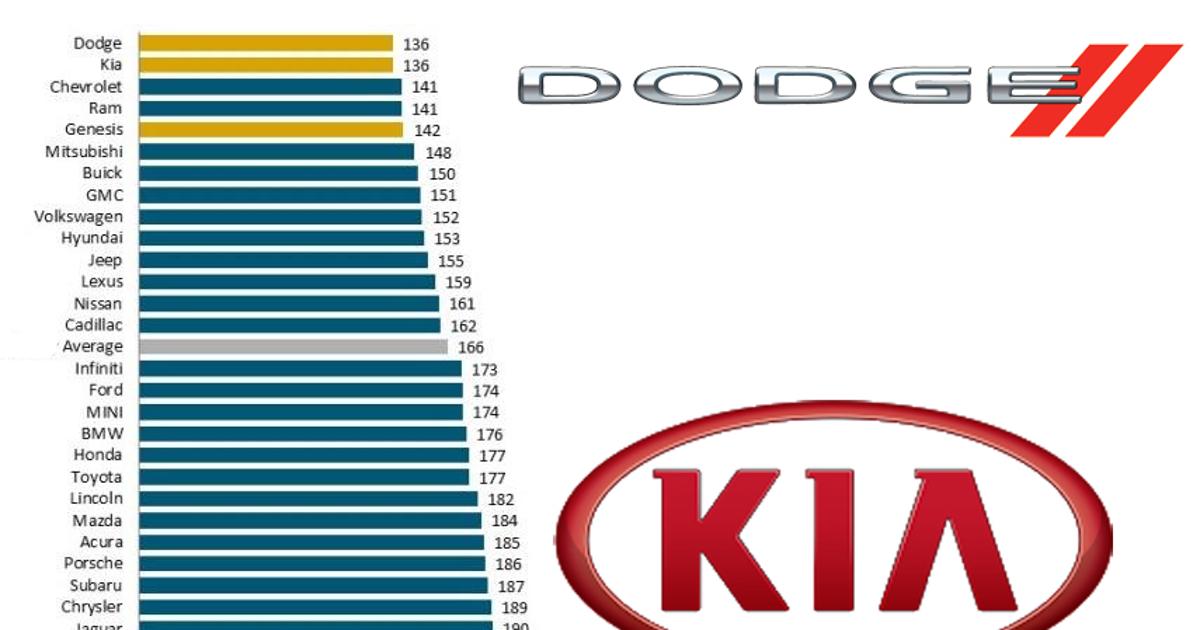 There’s nothing quite like solid data upon which to base buying decisions, particularly when you consider that a new automobile is one of the largest investments most people make during a lifetime. As production methodology has improved over the last few decades, the world order for the most reliable marque has changed on an almost annual basis and the latest full year report from J.D. Power indicates that past reputations are no longer relevant.

Manufacturers don’t publish such data because it makes them look bad. Would you pay extra for a luxury vehicle if you knew it was more likely to give you problems? Take a look at the ladder and you’ll see that stablemates Jaguar and Land Rover had the last two places in this survey in 2018 and 2019, and they’ve been split this year by such well known luxury brands as Mercedes-Benz, Audi and Volvo.

The J.D. Power Initial Quality Study has been tracking the problems American owners experience with new cars for 34 years. Measured exactly after 90 days of ownership, it provides a benchmark for initial new vehicle quality that new car buyers should study prior to any purchase. According to J.D. Power, initial vehicle quality has proven to be an excellent predictor of long-term reliability.

The study is critically important for prospective new car buyers as research shows that expected reliability is one of the main reasons a consumer chooses a particular brand and model.

This year, the Initial Quality Study has been redesigned for the fifth time in its 34-year history, and is now based on a 223-question investigation covering every category of a vehicle’s performance: infotainment; features, controls and displays; exterior; driving assistance (new for 2020); interior; powertrain; seats; driving experience; and climate.

That’s a bit of a shame, because it means that previous year scores are no longer directly comparable and the number of problems per hundred vehicles has gone up, though J.D. Power claims the overall reliability has not worsened; rather, the redesigned study asks additional questions that allow owners to cite more of the problems that they are experiencing.

With the revamped scoring, Dodge and Kia tied for first place in overall initial quality, with 136 problems per 100 vehicles.

Both brands came from quite disparate backgrounds in the awards. Kia is ALWAYS at the top of the rankings – this is the sixth consecutive year that it has been the highest-ranked mass market brand in the study.

Dodge’s equal first place makes it the first domestic American brand in the study’s 34 year history to rank highest and it demonstrates a superhuman effort on behalf of the marque to lift its game over the last two years. In 2019, Dodge had finished in eighth place, a massive 27 problems per 100 vehicles (PP100) behind Genesis and 20 PP100 behind Kia. In 2018, Dodge scored 98 PP100 which was below the industry’s 93 PP100 average and in 2017 the marque was on the border of the bottom quartile with 106 PPH compared to the industry average of 97 PPH.

American quality rising to the top

So Dodge has done itself proud and of equal significance was the performance of other American brand names Chevrolet and Ram, which tied for third place with 141 PPH.

Going one step further on the rehabilitation of American auto manufacturing, seven American brands performed better than the industry average of 166 PP100: the previously mentioned Dodge (136 PP100); Chevrolet (141 PP100); Ram (141 PP100); Buick (150 PP100); GMC (151 PP100); Jeep (155 PP100); and Cadillac (162 PP100). In many previous studies American brands have performed abysmally but the tide appears to have turned and this year represents the best-ever performance by the Detroit automakers in comparison to imported brands in the 34 years the study has been going.

Japanese brands sliding down the rankings

This survey more than any other has charted the fall of the Japanese brand names in the field in which they were once regarded as the benchmark: quality. Look back over the last five years of J.D. Power surveys and you can see that most Japanese brands did not improve while their Korean and domestic rivals did, and while the J.D. Power analysis is now more demanding, the Japanese names still trail most Korean and domestic brands.

Indeed, Mitsubishi (148 PP100), Lexus (159 PP100) and Nissan (161 PP100) are the only Japanese brands to rank above the industry average. “W. Edwards Deming said, ‘Quality is to fulfill the requirements of customers and satisfy them,’ and Japanese automakers excelled at this for quite some time,” said Dave Sargent, vice president of automotive quality at J.D. Power. “But some other automakers have surpassed them in recent years by understanding better what quality means for today’s owners.”

Tesla is not officially ranked among other brands in the study as it doesn’t meet ranking criteria. “Unlike other manufacturers, Tesla doesn’t grant us permission to survey its owners in 15 states where it is required,” said Doug Betts, president of the automotive division at J.D. Power. “However, we were able to collect a large enough sample of surveys from owners in the other 35 states and, from that base, we calculated Tesla’s score.”

Tesla’s score must be a significant cause for worry, as at 250 PP100, it is nearly a full problem per car higher than the seven highest scorers in the survey (i.e. at 250 PPH, that equals 2.5 problems per car, where the leading marques have a better reliability score than 150 PPH, which is equal to 1.5 problems per car), and still trails the next poorest marque (Range Rover) by a massive margin.

Infotainment creates the most problems

The category creating the most problems for new-vehicle owners is not surprisingly infotainment. According to J.D. Power, the most common complaints relate to voice recognition; Android Auto/Apple CarPlay connectivity; touchscreens; built-in navigation systems; and Bluetooth connectivity.