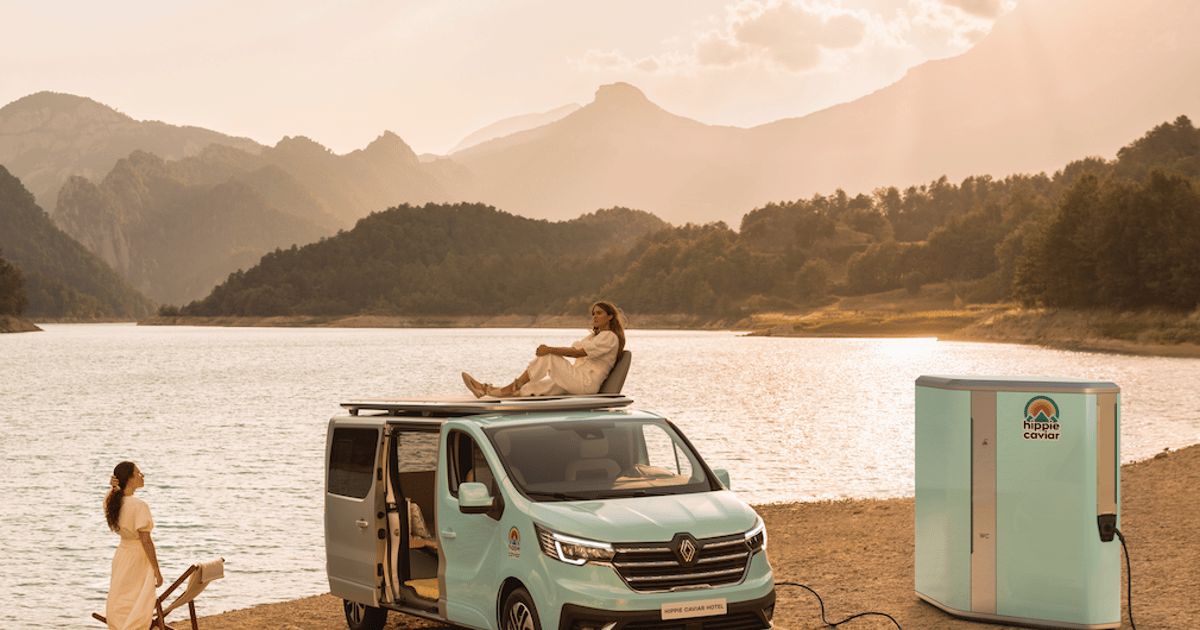 Renault previously tipped off plans to explore the distant RVing future with the Hippie Caviar Hotel concept. Now, it has revealed it also plans to put focus on the present with its Trafic SpaceNomad, a classic pop-top camper van that will soon be available in various major European markets. These latest vans will join a few other Renault-based campers at the 2021 Düsseldorf Caravan Salon, highlighting the French marque’s commitment to the surging camper van market.

Nissan spent much of early 2021 showing itself to be the brand of choice for untethered remote workers in Asia and Europe, and it appears its allies at Renault have a similar nomadic spirit. Renault explains it’s been a player in the camper van market for 15 years and is committed to expanding its “nomadic range” in light of the camper van’s exploding popularity. Its 2021 Caravan Salon booth will bridge together past, present and future.

When Renault first teased the Hippie Caviar just over a week ago, we wondered whether it had some form of kitchen or if it was tied to an all-terrain Uber Eats-type service. Turns out, it’s the latter — Hippie Caviar travelers can access meal delivery with the tap of a finger against the onboard touchscreen dining menu, and the selected items will be dropped off by drone. The service ensures that Caviar hippies don’t have to waste a precious second of leisure time with cooking or dishwashing, helping make the case for the concept camper’s five-star rating.

Renault teases that the meal delivery could be part of a greater concierge service, which we imagine could include delivery of sports gear, and perhaps even tour guides and activity instructors, directly to base camp.

The idea of food delivery won’t appeal to those that consider preparing their own meals an integral part of the RVing and camping experience, but there’s one major benefit that even the most dedicated road-trip chef can’t deny: without the need for a stove, sink or refrigerator in the van, Renault has loads of space left over to create a roomy, luxurious interior. In fact, newly released photos show the Hippie Caviar layout sharing more in common with a hotel room than the average camper van floor plan.

The Hippie Caviar camper cabin is something of a breezy sitting room on wheels, completely divided from the driver’s cab by a curved wall that hints at the possibility of a fully chauffeured experience. The multi-adjustable three-panel bed includes fold-up front and rear panels, capable of transforming into a day bed facing the scenery through the tailgate or the indoor TV. The front wall has a console we can only assume houses a charge-by-bottle mini-fridge, undoubtedly with exorbitant prices.

As we looked at last week, the Hippie Caviar has no need for an interior bathroom because it’s part of a greater service ecosystem through which users order up amenities like a rear deck, outdoor furniture and a full-bathroom suite to be dropped off at camp ahead of their arrival.

Another available-to-order Hippie Caviar amenity Renault identified originally, the electric vehicle charger shows up in the latest photos plugged into the concept camper. At first we weren’t sure whether Renault mentioned the charger to suggest that the Hippie Caviar was an electrified camper or merely as an allusion to the electric Trafic that will join its van lineup in 2022. The picture at the top of the article, however, shows it’s the former, adding a little more importance to what’s otherwise a fun, offbeat show car. We’ll see if Renault reveals any further details about the concept’s electric underpinnings at the Caravan Salon or saves them all for a more formal e-Trafic introduction.

The days of drone-dropped meals, camp concierges and full electric camping with on-demand fast-charging hookups are still a ways off, and the Trafic SpaceNomad shows what Renault #van lifers can expect here and now in 2021. A mid-size camper van much like the world-famous VW California, the heated four-sleeper SpaceNomad is a Renault-badged Trafic conversion provided by French brand Pilote. The camper van includes a folding rear bench/bed, driver-side kitchen block with dual-burner stove, sink and 49-L fridge, and pop-up sleeper roof.

The SpaceNomad also brings a trunk-stowed dining table that attaches to the kitchen block to serve those seated at the swivel cab seats and rear bench, removing and setting up outside for those who prefer outdoor dining, whether under the open sky or included side awning. There’s no indoor bathroom (or app-ordered bathroom pod), but a rear-plumbed outdoor shower provides a way of staying clean on the road — add your own portable toilet and you have all your wet bath necessities taken care of.

After a successful 2020 trial in Switzerland, Renault will expand Trafic SpaceNomad availability to five additional European markets, Austria, Belgium, Denmark, France and Germany, in early 2022. The van will be available in two lengths and four- and five-seat configurations, powered by engines ranging between 110 and 170 hp.

Renault will show the Hippie Caviar and Trafic SpaceNomad alongside its SpaceClass Escapade eight-seat sleeper van, a full-size Ahorn Master camper van, and an historical 1977 Estafette camper van. The Caravan Salon kicks off on Friday, and we’ll be bringing back more details on the show’s highlights, including any additional information Renault might release about its latest production and concept campers … or electric vans that serve as their base.

Renault gets totally groovy with the Hippie Caviar Hotel below.