Product Review: Prevent bike theft with these locks (and bits of advice) 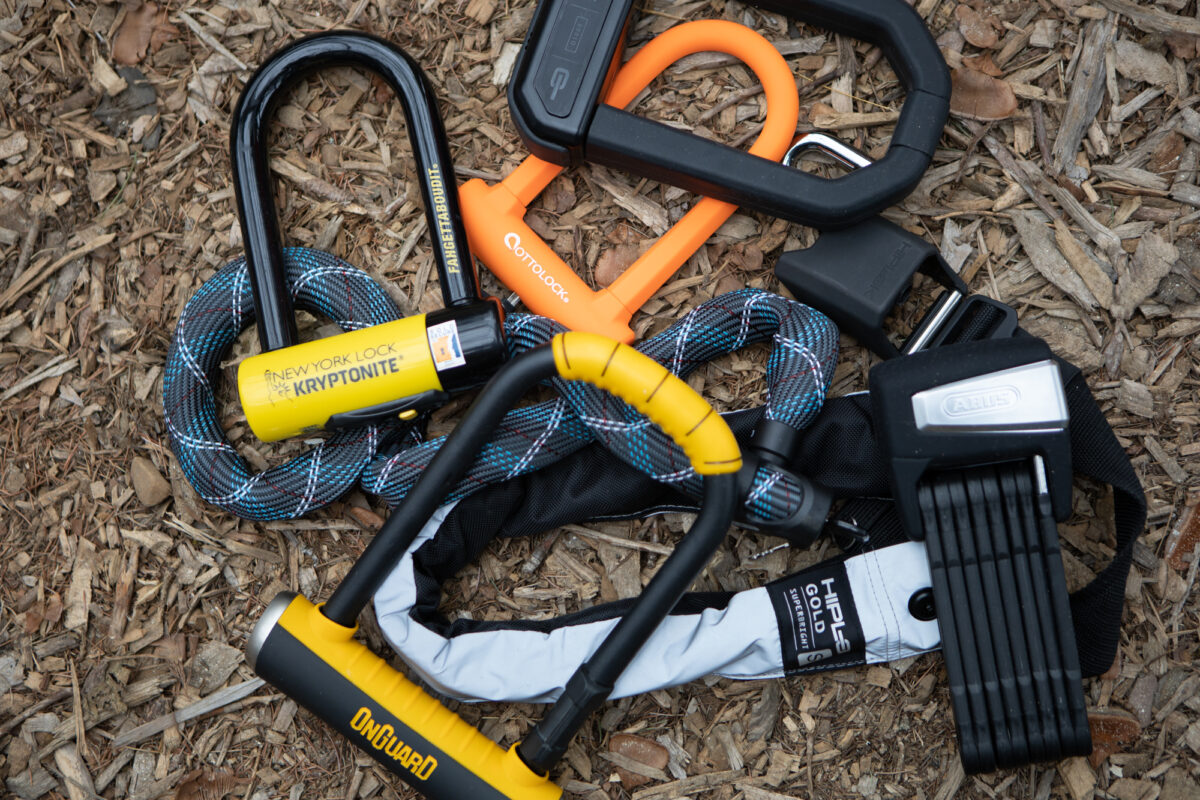 What do you call a bunch of locks piled on the ground? I have no idea.
(Photos: Josh Ross/BikePortland)

Bike theft is a huge issue in Portland and many of you are rightfully concerned about what it takes to keep a bike out of the hands of thieves.

[Cable locks] can be cut so quickly, without noise, and with small hand tools that they should never be used.

When I’m not writing about products for BikePortland my main outlet is Cycling News. As part of that, I recently did a deep dive into bike locks. Although I’m proud of that article, it’s not the right list for Portland. Cycling News is international and covers a huge range of needs across the globe. In this article I’d like to tailor it to a more local audience.

As I worked on these articles I talked to everyone I could about how bikes were being stolen. I reached out to police, manufacturers, experts at Bike Index, and also email lists of major local riding clubs and organizations. Each group I reached had different information and different things to add to the puzzle.

Here’s what I learned…

I started with the police. I tried a variety of police departments both in the US and even in London. It was a dead end. Police departments have eliminated resources and were not a wealth of information. If your bike is stolen it’s worth a report but make sure you are working with Bike Index as your primary resource for recovery. Also, make sure you have your serial number recorded somewhere you can reference if a bike is stolen!

In terms of finding out how bikes are stolen, the places to get that info were either the manufacturers or the victims themselves. From the manufacturers I got a top-level idea of what they were trying to protect against. From that perspective the most common tools are simple pry-bars of all kinds. Anything thieves can use for leverage is a common attack method. Also on the radar are bolt cutters and portable angle grinders (like what happened recently to Madi Carlson in L.A.). 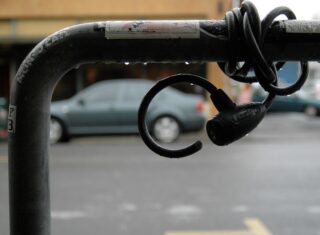 I heard from victims through local cycling email lists. In almost every instance, they told me a cable lock was cut. Cable locks are not security and I even question if they are worth bothering with as a secondary lock. They can be cut so quickly, without noise, and with small hand tools that they should never be used. Even on long rides in the country, it’s just not worth bothering. For those quick stops, bring your bike inside with you. It’s worth noting I did talk to people who had their bike stolen off a rack while using built-in cable locks. Never rely on them!

Outside of cable locks there were a few people I found who still experienced theft. One of them had a bike locked with a u-lock in a parking garage during work and it still got stolen. Another person, not in Portland, who locked his bike outside his house with a Kryptonite New York Fahgettaboudit had it cut with an angle grinder. I still recommend that lock but it will fall, quickly, to an angle grinder.

Aside from theft when using a lock, another big trend emerged during these discussions. Most people who have bikes stolen don’t have them locked. This should be obvious but there were a huge number of people who had always been incredibly careful only to have an unlocked bike stolen from a garage or “secure” bike room of some kind. Recently a friend had a shed where he kept his bikes broken into. The shed was locked with a quality lock and the cut through the steel holding the door closed. At home, consider an anchor system and a massive lock.

Now that you’ve got an idea of what you are dealing with, let’s talk about locks.

This is my number one pick and the lock I’ve used personally for years. It’s a beefy lock that’s cheap. There’s not much more to elaborate on than that. It comes with a bunch of keys, It’s got plastic to protect the bike frame, and a frame mount. I did eventually break the frame mount but aside from that it’s continued to work well for me. If you are heading out in the world this lock will work for most situations.

This option is going to be controversial. Ottolock has racked up some unfavorable press here in Portland. A lot of that has to do with what they would consider a mis-use of their locks. You can decide if that’s mis-leading advertising or mis-use but I decided not to wade into that discussion. One thing I worked really hard to do with my list was find inexpensive options. The Sidekick is a double shackle 12mm U-lock that costs about $35-40 depending on where you buy it. It’s not the most secure in the world but it should do the job for quick stops and as a secondary lock. The biggest drawback is that it’s too small to fit through a wheel, a frame, and around an anchor. For the price, I didn’t find anything to match it.

This lock has been the absolute standard in security for years. It’s priced in the $100 and $150 (big range but it seems to move around a bit) and it’s secure because it’s an 18mm shackle. There’s no magic to it, it’s just a big lock that’s harder to break. You can definitely cut through it with an angle grinder but given the price and security you could double it up.

This is where things get a little murky. What’s better, a chain or a U-lock? It’s not totally clear and they shine in different ways. Chains are tougher to cut with an angle grinder and more flexible in how they lock, or to what, but tend to be more difficult to carry. The Hiplock Gold chain lock is a great option because it’s a very secure lock and they make it easy to carry. It fits around your waist, without locking, and the reflective option even adds visibility. You can lock a wheel, a frame, and a sign post without too much trouble. You could also use it on a bike rack where a U-lock wouldn’t work.

I covered this lock here before. The claim is that it can’t be cut with an angle grinder and I have seen evidence of that. It’s always tough to tell if there’s some way to break a lock that is intentionally not being shown but I’ve seen it attacked with a grinder and it didn’t fail in any reasonable amount of time. This is the lock I use these days and it’s great but it is on the small side. What I like is that it’s about as portable as a regular lock. It’s heavy but much more portable than anything in the same class of protection. The problem is it can’t currently be purchased and it’s very expensive relative to other locks. You could afford two of the Kryptonite New York Fahgettaboudit U-locks for the same price and that might be a more flexible option.

I included this one on the Cycling News list as the option for securing bikes that are attached to a car rack. I’m including it here for the same reason. Realistically you could use any number of chain locks on a rack and there are more secure options. This one is a little longer though and that might make it a little easier. It’s not a great idea to use any lock while the car is moving as it’s very possible for small vibrations to damage a frame. Once stopped, if you already own another quality chain lock you could probably use it. If you are heading out to buy something just for this use though, this one is a reasonable choice.

I’m throwing this one on here so I can warn you not to use folding locks and also because I like the idea of a smart lock in this context. Folding locks are less secure and more expensive. Overall my recommendation is to not bother with them. People like them because they are convenient to carry. If that’s what you must have, the Abus Granit 6500 folding lock is the heaviest security available. This version takes the same design but adds an alarm and that’s only going to help security. I expect push back on this suggestion because of the price, and electronics, and that’s to be expected. You can get great security for less money but adding an app and electronic locking actually makes sense in this context. It solves a problem and the trade off is money. That’s going to be alluring for some people and if that’s you, this is the best choice.

After working on this for the last month or so I have piles of locks at my house. What I found is that a lot of them were very similar and very good. At certain price points there is a lot of competition and all the options are great. For this article, I tried to choose things with a unique selling proposition — products that do a specific, useful thing. The list can’t possibly cover everything though. If you have a lock you love, please let everyone know in the comments!

Josh Ross writes about products and adventures he takes with them. [email protected] and @josh_ross on Twitter.