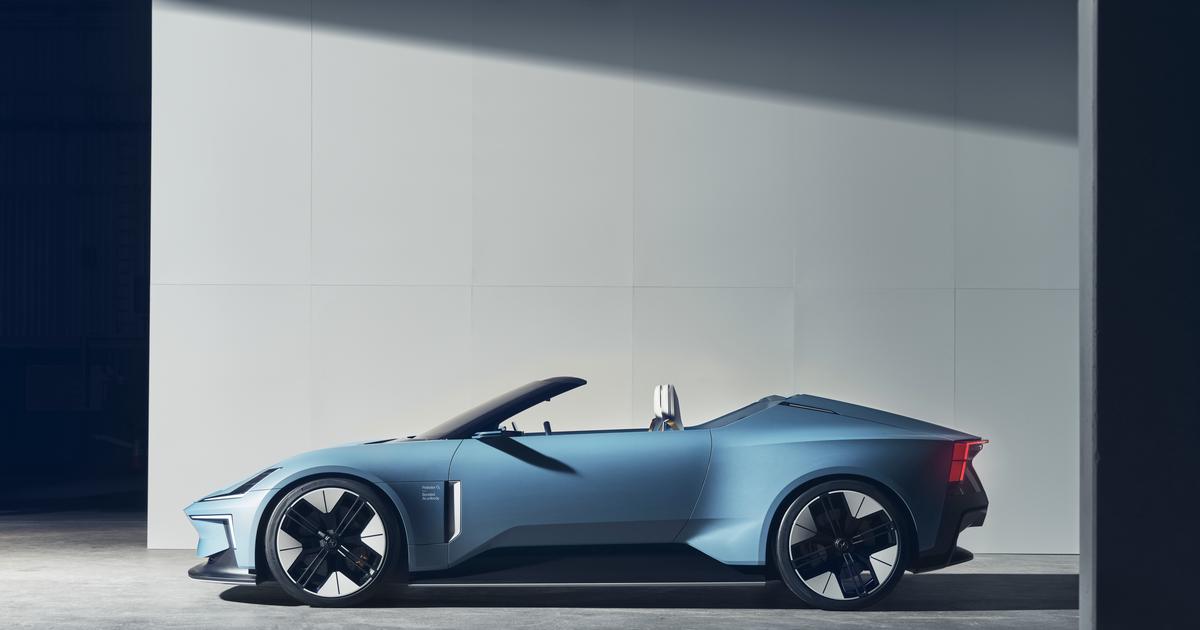 The Tesla Roadster might have kickstarted the modern electric car revolution, but since then, electric convertibles have been very few and far between. This seems certain to change as electric cars continue to multiply and take over market share, and Polestar is getting in front of the curve with the O2 concept. The new drop-top picks up where the 2020 Precept concept left off, showing Polestar’s intriguing vision of a sporty electric 2+2 that lets the clean, emissions-free air flow freely. And it films the action with its own autonomous drone.

Polestar has carved its new concept atop a bespoke bonded aluminum platform that promises high rigidity, tight body control and intuitive dynamics. The platform is adapted from the bones of the upcoming Polestar 5, developed by the company’s UK R&D team. Different grades of aluminum contribute to dynamic performance and are carefully labeled for easier, more precise recycling that allows individual grades to maintain their properties during the recycling process.

Like twin siblings who pursued very different athletic pastimes in high school, the O2 and Precept concepts have clearly related facial features but very different bodies. On the O2, the mirrored “Thor’s hammer” headlamps and curvy hood give way to a sharply angled pair of black-out A-pillars that end near the high point of the steeply sloped roofline. The body-color roof frame surrounds a large slab of panoramic glass, and the sides of that frame keep dropping across the rear deck to the edge of the full-width rear LED air blade.

We liked the soft curves of the Precept but find the new angular treatment even more dramatic and eye-catching, a nice way of introducing your marque’s first convertible. The crisply cut lines of the rear diffuser, side skirts and vertical side ducts contribute to the angular look.

On the other side of the glossy concept skin, Polestar puts the spotlight on simple, sustainable materials. It uses a single thermoplastic in crafting many of the components and surfaces around the interior and a recycled polyester for soft materials like the foam, 3D-knit fibers and laminations. Paring down its materials list simplifies manufacturing and recycling to promote circularity.

Beyond that, the 2+2 interior appears fairly simple and understated, presenting the driver with a small digital instrument display and 15-in infotainment tablet. Tactile controls are kept to a minimum and concentrated around the steering wheel and center dial controller.

The one big surprise inside is the cinematic autonomous drone that lurks behind the rear seats. Developed in collaboration with fellow Geely brand Aerofugia, the concept drone can take off while the car is in motion. When the driver selects drone launch on the display, an aerofoil rises to create a negative-pressure zone behind the rear seats, and the drone slides down the center of the rear deck to take off. The drone then auto-follows at speeds up to 56 mph (90 km/h), filming the car in action before automatically returning to its dock. Once the driver throws the shifter into park, the footage can be viewed, edited and shared on the infotainment display.

The drone is kind of a silly concept feature, but it could certainly be fun on a winding, scenic road with little traffic. You can watch how Polestar envisions it unfolding below.

Polestar doesn’t make any promises about a production O2 – or convertible, for that matter – but it does say it intends to launch three cars over the next three years, each of which “has potential to gradually realize” some of the ideas previewed on the O2 and Precept. If nothing else, that should mean some sportier Polestars in the pipeline. The first will debut in 2022.