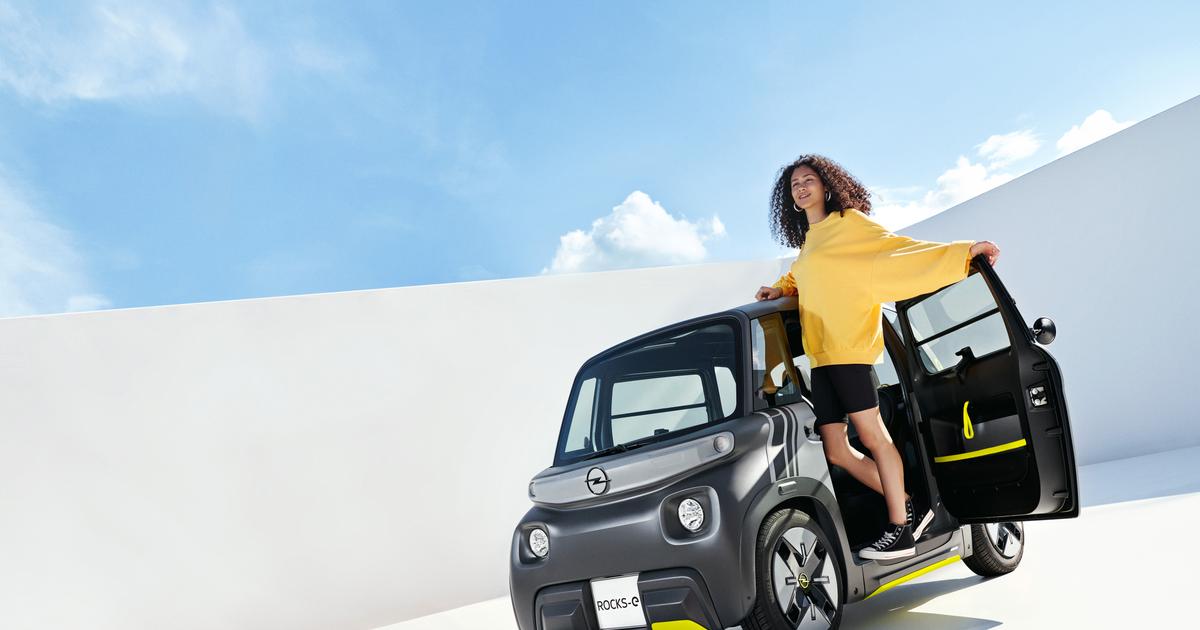 German auto maker Opel has launched what it’s calling a Sustainable Urban Mobility vehicle that’s designed to sit somewhere between an electric scoot and a small passenger car. The familiar-looking Rocks-e has a top speed of just 45 km/h, and a per-charge electric range of 75 km.

We know what you’re thinking, and we thought it too. The Rocks-e electric microcar looks very familiar, and it’s actually built on the same platform as last year’s Ami model from Citroën, courtesy of Amsterdam-based automotive multinational Stellantis.

“The Opel Rocks-e and Citroën AMI use the same technology toolbox from Stellantis; however the Rocks-e carries typical design cues known from other Opel models such as the two-tone wheel-arches and side rockers on all trims, and most prominently, the Opel Vizor element,” a PR rep told us. “The Rocks-e also has unique trim, equipment and accessory options.”

The per-charge WLTP range is also on the low side, at 75 km (46.6 miles), but this little people mover is not intended for long journeys out of town, it’s an inner city/urban ride for those wanting to roll from A to B without leaving tailpipe emissions behind.

The Rocks-e’s 5.5-kWh battery can be fully charged over a household supply in 3.5 hours, and the 3-m-long (9.8-ft) charging cable is housed permanently within the vehicle. An adapter is also included for topping up at public charging stations.

It rides on 14-inch wheels, benefits from a tight turning circle of 7.2 m (23.6 ft), and should be able to park in places where drivers of full-sized EVs would only glance, and move on.

Entry to the microcar is via two identical doors, though the driver side swings backwards while the passenger side swings forward. Occupants are treated to a panoramic glass roof and the promise of good all-around visibility. There’s no large touchscreen panel like you’ll find in bigger electric cars, but a small display in front of the steering wheel shows speed, driving mode, battery status, remaining range and mileage.

There’s a smartphone holder on the center console, and a companion mobile app is available for diving into more information about the vehicle. Naturally, space for cargo is limited, but Opel reckons that luggage volume of up to 63 liters (2.2 cu ft) is possible in the passenger footwell, and there’s a hook inside for hanging up a large shopping bag.

Opel is remaining tight-lipped about more detailed specs, and about pricing – though Citroën’s Ami launched at just €6,000 so this one shouldn’t break the bank. The Rocks-e will also be available for monthly leasing at a cost “similar to that of a ticket for local public transportation.”