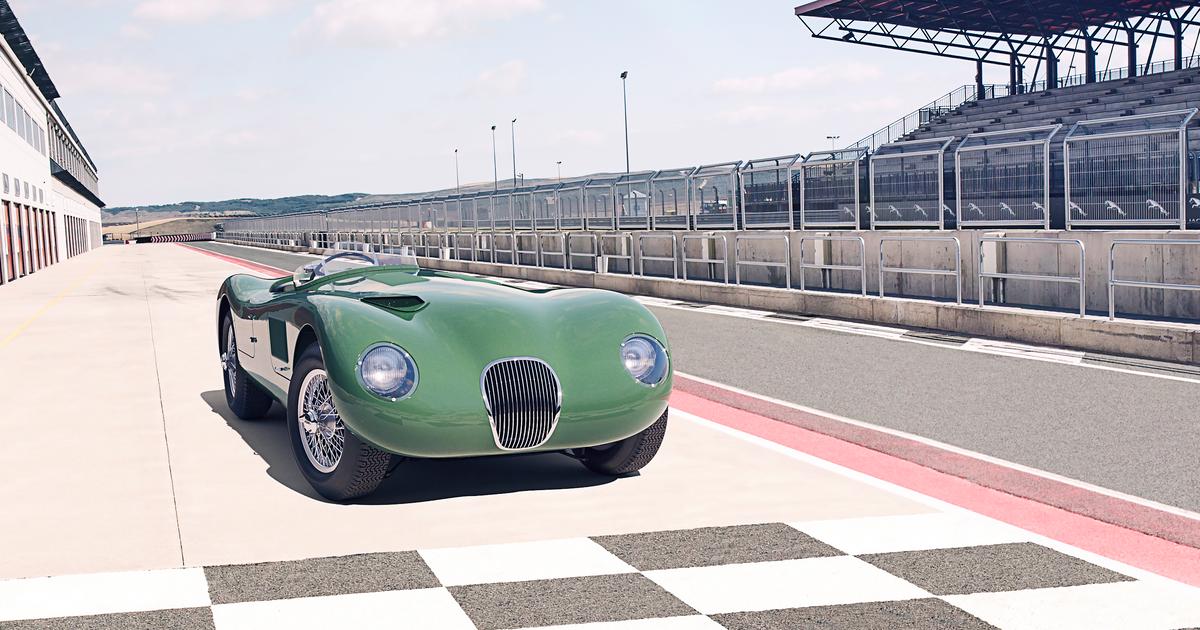 Jaguar Classic continues reciting the alphabet backwards, getting to work on a C-type Continuation car to join the E-type and D-type Continuations it released in years past. Its latest project brings back the edgeless, roofless beauty of the 1953 Le Mans-winning C-type for a new generation of car enthusiasts. Jaguar will hand-build each model to a raw, racetrack-ready spec that includes a stripped down, bare-metal interior, disc brakes and an available FIA-approved harness.

Jaguar Classic announced its newest Continuation model in celebration of the 70th anniversary of the C-type, which debuted as the XK120C (Competition) in 1951. Encouraged by the racing success the production XK120 had in 1950, Jaguar stepped its game up for 1951`. Iconic designer Malcolm Sayer sculpted a gorgeously rounded, aerodynamic aluminum race body hung on a lightweight tubular frame to create the competition-spec XK120. Powered by an uprated 200-hp inline-six and driven by Peter Walker and Peter Whitehead, the XK120C won Le Mans 1951. Legendary racer Stirling Moss also piloted an XK120C at the event.

Jaguar updated the C-type in 1952, famously adding in the disc brakes it had co-developed with Dunlop to make the C-type one of the world’s first race cars to incorporate the new braking technology. As Jaguar has described the scene in the past, the officials at the 1952 Mille Miglia demanded proof that the mysterious discs were in fact brakes and not illegal equipment. Stirling Moss and Norman Dewis drove the C-type to the first victory for a disc-braked car at the Reims Grand Prix that same year.

In 1953, Tony Rolt and Duncan Hamilton raced the C-type to a Le Mans victory, setting a record as the first to average over 100 mph (161 km/h) during the great race. C-types also finished 2nd and 4th. That victory convinced other Le Mans teams that they’d need disc brakes to compete in the future, fast-tracking the development and popularization of the new braking technology. At Jaguar, the C-type was retired in 1953 but gave way to a successor like no other: the disc brake-equipped D-type that raced to a Le Mans hat trick between 1955 and ’57.

It’s the 1953 Le Mans car that serves as the basis of Jaguar Classic’s latest ultra-limited Continuation model. The classics shop will skip the drum brakes assigned to the production C-types Jaguar built back in the early 50s, remaining true to the Le Mans car with a race-spec powertrain and driveline that includes disc brakes and a 220-hp 3.4-liter inline-six with triple Weber40DCO3 carburetors. The FIA-approved harness retention system will be offered as an option, and the C-type Continuation cars will be ready for historic racing, track and closed-road use.

Using experience gained in past Continuation efforts, Jaguar Classic has compiled drawings, records and data from the original 1953 C-type, turning it all into a precise digital recreation using the latest CAD tech. It will move forward with building a mere eight C-type Continuation cars at the Jaguar Land Rover Classic Works facility in Coventry, UK. In 2022, it will host a celebratory launch event for the lucky buyers.

Those not among the Lucky 8 new owners can still enjoy a C-type experience virtually. Jaguar just launched a C-type Continuation configurator that allows users to experiment with 12 exterior and eight interior colors, along with various trim and badging options. Users can share their neo-classic creations using #70YearsofCTYPE, and Jaguar will select some to be featured on the @JaguarUSA Instagram, Facebook and Twitter.