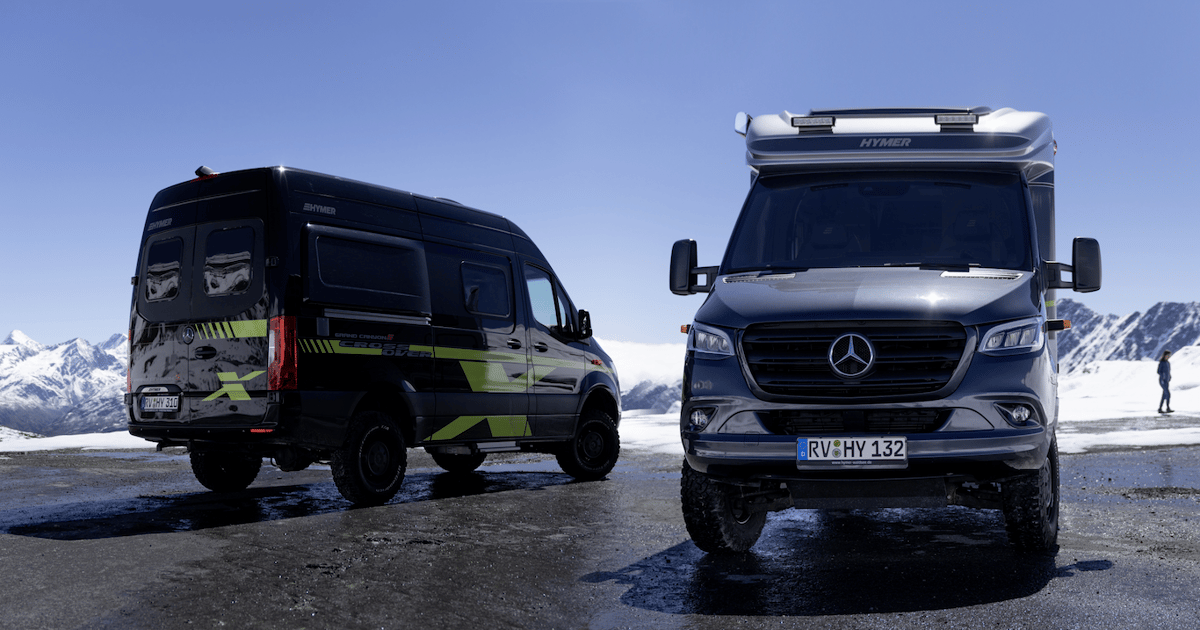 Hymer already offers a 4×4 option on Mercedes-Benz Sprinter-based campers like its Grand Canyon S camper van and ML-T 570 compact motorhome, and now it’s going deeper into off-road territory with a pair of new models. Citing high demand for full-fledged off-road camper capability, it’s building out its 4×4 portfolio with the new “CrossOver” edition. Along with standard 4×4 and bright “CrossOver” graphics, the newest Grand Canyon S and ML-T 570 models carry upgraded off-road equipment, an off-grid power system with solar, and other enhancements aimed at disappearing on all-season, all-terrain adventures for over a week at a time.

Hymer stops short of upgrading Mercedes’ stock AWD with an aftermarket 4×4 from the likes of Oberaigner, the way La Strada has done with its Regent S 4×4. Instead, it relies on Mercedes’ own selectable 4ETS electronic all-wheel drive, which lacks the mechanically locked 4WD functionality of Oberaigner’s aftermarket system but does include a reduction gear. This is the same 4×4 option available on Hymer’s other Mercedes Sprinter 4×4 campers, and it brings a 9-cm (3.5-in) suspension lift for better ground clearance.

Where Hymer steps up the new CrossOver capability beyond traditional Grand Canyon S and ML-T 570 4×4 models is in upgrading the standard equipment package with more all-terrain/off-grid features. When it comes to driving, that includes 16-in all-terrain tires and front LED light bars. Vibrant CrossOver paint schemes enhance the look, and an “off-road survival kit” with folding spade and axe brings extra utility. The larger ML-T motorhome also carries a roof rack, ladder and spare tire holder.

When the CrossOvers leave the dirt for the pavement, drivers can rely on helpful tech like Distronic Plus active distance assist, lane keeping assist and traffic sign assistant. Power comes from a 188-hp diesel engine and 7G-Tronic automatic transmission. Inside, both CrossOver models include a 10.3-in MBUX infotainment system and an available passenger-side safe for locking up small valuables like wallets and jewelry.

Hymer upgrades the camper side of the Grand Canyon S standard equipment package with a focus on increased autonomy. The Hymer Smart Battery System combines two 135-Ah lithium batteries with a 95-Ah AGM battery to offer more electrical capacity than the average camper van. The diesel heater provides both cabin heat and hot water and includes an alpine upgrade kit that keeps it humming smoothly at elevations over 1,500 m (4,921 feet). The company estimates that the Grand Canyon S CrossOver can camp off-grid self sufficiently, spring through winter, for up to 10 days.

The CrossOver variant maintains the 593-cm (233-in) Grand Canyon S’ standard floor plan, which is anchored by a transverse 195 x 135-cm (77 x 53-in) rear bed that lifts away during the day to clear room for bicycles, luggage and general cargo. A slide-out under the bed can be equipped with an optional Mobicool 25-L compressor cool box to supplement the 90-L fridge/freezer in the kitchen.

Moving forward, the Grand Canyon S CrossOver includes a driver-side wet bath compartment behind a dinette that comprises a two-seat bench, folding tabletop and swivel cab seats. The van has four belted seats for use during driving, and a pop-up sleeper roof can be added optionally to give all four passengers a place to sleep inside. The kitchen block packs in a dual-burner gas stove, sink, folding counter extension and the aforementioned fridge/freezer. Water is stored in a 100-L fresh and 85-L waste tanks.

Those looking for more space than the inside of a stock Sprinter van offers can size up to the 689-cm (271-in) ML-T CrossOver, which pairs a Sprinter cab with a compact, semi-integrated motorhome module. The ML-T CrossOver doubles up on solar for a total of 180 watts of panels sending charge to the Smart Battery System.

The ML-T’s rooms are laid out the same way as in the Grand Canyon S but built larger in size. The rear bedroom includes two raised single beds that combine into a double via center cushions. The kitchen packs a triple-burner stove, sink and 152-L fridge/freezer, while the front dining lounge replaces the two-seat bench with a larger L-shaped bench around the adjustable tabletop. There’s no pop-top option, but a mattress can be added across the front seats for a total of three sleeping berths.

While Americans will have to look overseas in envy once again, there is at least some hope that Hymer might bring these vans (or something like them) over to North America if and when it launches products here. Unlike the many European campers based on vans that aren’t even available in the States, the CrossOver’s Mercedes Sprinter 4×4 base has become a staple of the American camper market.

Watch Hymer put both CrossOvers through some torture testing in snow, dirt and mud in the minute-long video below.