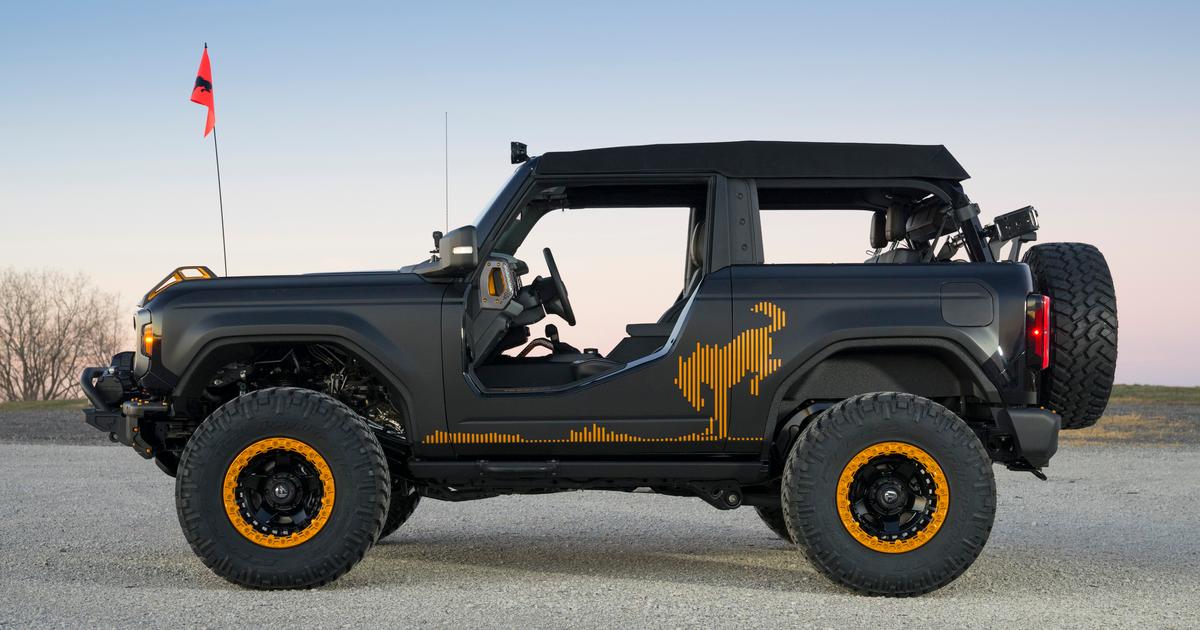 Since it first launched the all-new Bronco, Ford has spent a lot of time stressing how the 4×4 fits the lifestyle of overlanders and other long-haul off-road travelers. But what about the more common weekend warrior? Ford definitely hasn’t forgotten about them, and its new Bronco Badlands Sasquatch 2-Door Concept proves it. The SEMA-style build highlights the Bronco’s deeply ingrained bolt-on modularity, showing how the 4×4 can quickly change from a highway-hauling 9-to-5 commuter to an extreme backcountry mountain scaler and back again in less time than it takes to drive to the trailhead.

In a process that reportedly took but a few hours, Ford transforms a standard Bronco Badlands 2-Door with Sasquatch Package into an airy special-edition built up for serious off-roading. It swaps out the doors, front fenders and flares, rear quarter panels, grille and wheels with a drill and basic tools, turning the Bronco from a standard everyday commuter into a backcountry force of nature.

The newly added impact-resistant fenders are a slimmer, lower profile design meant to better maneuver around tight trail without getting dinged or scratched. And if they do take a beating, the owner will be swapping them out for the standard set before pushing off to work on Monday morning, so there’ll be no sign of the toll the weekend took. The cutaway step-over doors, meanwhile, pull inspiration from the first-generation Bronco U13 Roadster, providing a breezier ride and offering an easier path for sticking your head out to get a better view of the trail and tires.

Ford also swaps in 3D-printed titanium components to save weight and boost off-road capability. Both the trail sights on the hood and grab handles inside benefit from this light, strong construction technique.

We love the concept, but if there’s one place Ford went wrong it was in making it too damn pretty. The matte of the bolt-on panels against the glossy black of the original components, combined with the cutaway doors and equalizer-style Bronco graphics all look way too nice to be dedicated solely to taking an off-road beating. If anything, we’d be inclined to make it a different kind of weekend driver – one that sits protected in a garage and only comes out for weekend cruises (on road) and car shows. Perhaps we might off-road the stock version before bolting the concept body kit back on and building it back to show floor form.

Ford debuted the new Bronco Badlands Sasquatch 2-Door concept at a special SEMA-style Auto Nights event it broadcast digitally last week. The concept was joined by a few other SUV and truck builds, all wearing various gear racks and other accessories for a more rugged, outdoorsy look.

The Mad Bronco Sport Badlands is one of those other builds and yet another instance of Ford advertising the overlanding intentions of the new Bronco family, including the Sport. Prepared in collaboration with Mad Industries, the concept is designed as an outdoor adventurer’s dream rig with a roof rack loaded with a kayak and recovery gear. For those who don’t want to camp out in or on the Bronco itself, this one tows a Boreas Campers MXT off-road squaredrop trailer. The Bronco Sport itself gets a suspension lift, BFGoodrich All-Terrain KO2 tires and an off-road light bar as part of its rooftop accessories kit, looking the part of a capable wilderness shuttle.