Ford Bronco Everglades rises from the mangroves like a surly gator 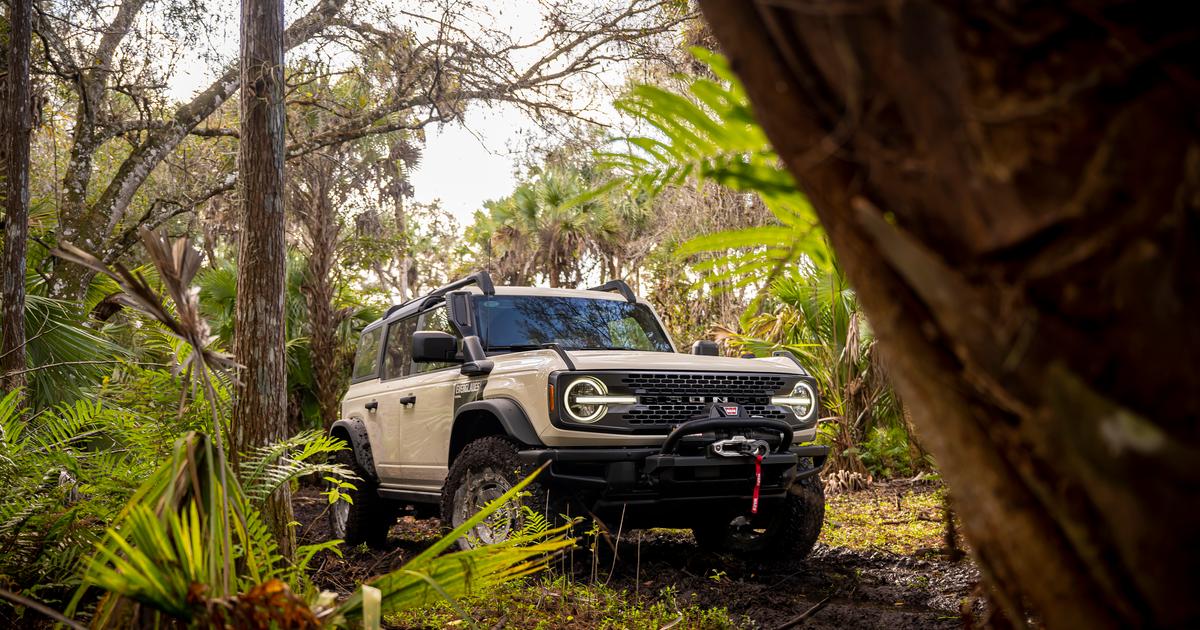 Ford once again takes advantage of the modular nature of the Bronco 4×4 to launch the latest special edition off-roader of the family, the Bronco Everglades. A new spin on “Built Wild” construction, the Everglades is meant to push onward from the point where lesser rigs pull a U-turn, powering forward when the mud gets slick and breathing freely when the river deepens. And if it does gets stopped in its tracks, a Warn winch torques it to freedom.

Built on a four-door Bronco with Sasquatch Package, the Everglades package’s biggest, most obvious addition is the snorkel next to the windshield. Instead of just clamping on an aftermarket snorkel, Ford designed its own, a neatly integrated rectangular tube that hugs the natural slope of the passenger-side A pillar. The component raises the engine’s air intake above the dust, water, snow and other nasties of the backwoods, allowing it to breathe freely in dank, dirty conditions. Two swappable plates let drivers change direction of the inlet based upon current trail and weather conditions.

Couple that snorkel with raised venting on the axles, transfer case and transmission, and the Everglades’ wading capability leaps up above 3 feet to 36.4 in (92.5 cm). That’s an increase of close to 3 inches (7.6 cm) over the standard Bronco with Sasquatch package and really feels like about as much water as you should be attempting to roll through in anything less than a boat or full amphibian.

Even with those extras, and the 35-in Goodyear mud-terrain tires on the ground, the Bronco Everglades driver seems the type who will most definitely push the rig to its limits … and perhaps beyond, to the point where it gets hopelessly stuck. If that happens, the 10,000-lb (4,536-kg) Zeon 10-S Warn winch embedded in the heavy-duty modular front bumper delivers a freeing lifeline for getting unstuck. And for those drivers who play it more carefully, the winch could always help in rescuing drivers who chose not to.

A more subtle aesthetic addition, the wheel arches over top the big M/T tires depart from the standard Bronco curves to gain a little extra angle. The fender flares follow suit, and while they aren’t the full-on flat-top steps of a Jeep Wrangler, they are noticeably more squared-off than the standard Bronco flares.

Other package highlights include the roof rack with crossbars, safari bar, rock rails and steel bash plates. The Everglades comes in five colors, including an Everglades-exclusive low-volume Desert Sand option, and wears Everglades topography graphics on the front fenders.

Ford will open ordering for the 2022 Everglades special edition exclusively for existing Bronco reservation holders in March. The new variant will start at US$54,495, including destination fee, and deliveries will begin this summer (Northern Hemisphere).