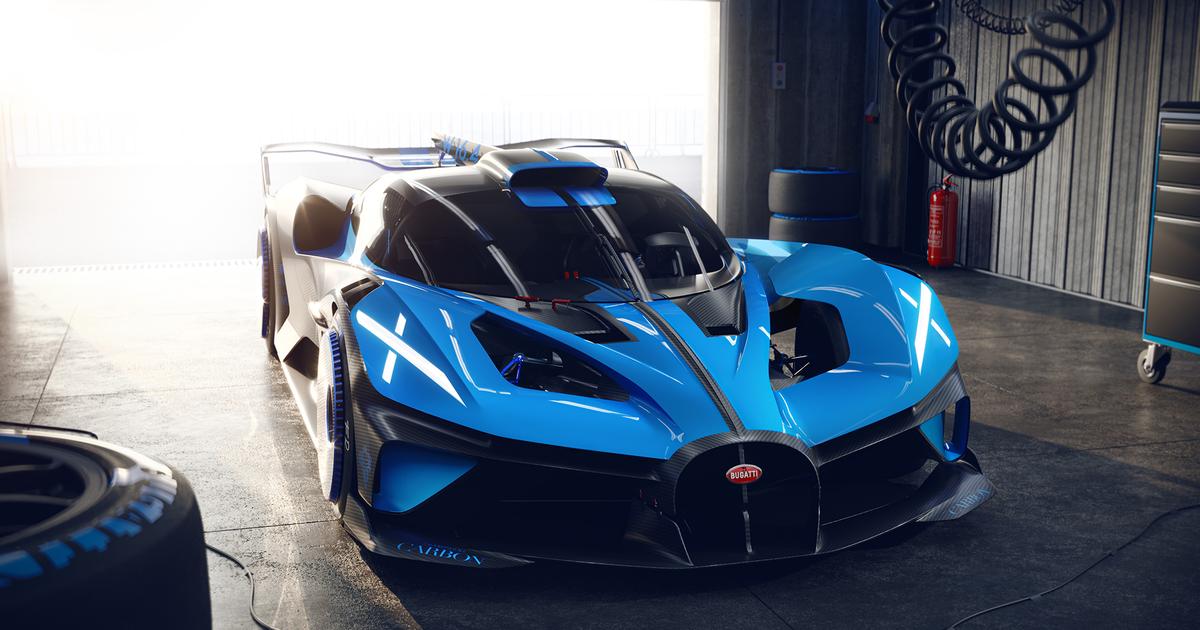 The most “extreme, uncompromising, fastest and lightest” vehicle concept in Bugatti’s recent history – it’s a description that refuses to be ignored, for anyone vaguely familiar with Bugatti’s past work in putting out some of the world’s most extreme, uncompromising and fast cars. Pushing itself ever further, the French marque presents the Bolide, an ultralight, track-focused hypercar parked at the bleeding edge of automotive possibility. An 1,825-hp quad-turbo W16 sits below its airy, shrink-wrapped bodywork, ready to push the Bolide to straightaway speeds “well above 500 km/h (311 mph)” while also leaving a trail of shattered track records in its wake.

Ever wonder what Bugatti’s quad-turbo 8.0-liter W16 could do if decoupled from heavy, bulbous cars like the Veyron and Chiron? Bugatti might not phrase it quite like that, but it has definitely asked the question … and answered with the Bolide. The car is built not only for top-end speed but also for razor-sharp handling around the track, ultra-quick acceleration and fast, reliable braking.

“We asked ourselves how we could realize the mighty W16 engine as a technical symbol of the brand in its purest form – with solely four wheels, engine, gearbox, steering wheel and, as the only luxury, two seats,” explains Bugatti president Stephan Winkelmann. “Driving the Bolide is like riding on a cannonball.”

A cannonball that can corner and maneuver like a Heisman-winning running back.

If it could have, Bugatti probably would have dropped the W16 and its quartet of turbochargers straight into the small, open-top Type 35 and immediately released the resulting torrent of speed and fury on the track. Instead, that legendary Bugatti and the more than 2,000 racing victories it took home between 1924 and 1930 served as the Bolide’s spirit animal while Bugatti stripped the Chiron clean to the engine and rebuilt it from the chassis up as an F1-safety-reg-compliant track car.

There’s only one logical place to begin looking at this particular car: the W16 powertrain. Bugatti engineers worked into the wee hours to modify the engine and gearbox for the higher rpms needed for race-grade track performance. Their work included de-throtting the intake and exhaust system to achieve more rapid, extreme engine response and reworking the quad turbos to build up extra boost pressure at higher engine speeds. They also managed to cut some weight in the process. Pump the Bolide’s tank with 110 octane racing fuel, and the reborn W16 puts out up to 1,825 hp and 1,850 lb-ft (2,508 Nm) of torque.

Raw power is only half the weight-to-power equation, and when seats are considered a luxury, you know a car has some major weight-stripping at its heart. It starts with the F1-style monocoque, which Bugatti built up from the type of exceptionally stiff, strong carbon fibers usually reserved for aerospace engineering. A high-strength stainless steel rear frame is welded to the back and components are fastened snugly with titanium hardware.

Mechanical components also get put through the magical lightweighting machine. The auxiliary driveshaft is made from a titanium-carbon hybrid blend specced to withstand temperatures as high as 260 °C (500 °F). 3D-printed titanium features heavily throughout, including in the push-rods for the double-wishbone suspension. Ceramic disc racing brakes bring the racing-slick-wrapped center-lock magnesium wheels to stop, shedding heat with help from carbon-titanium turbofan radial compressors.

Much like an F1 car, the Bolide’s look is defined as much by what’s not there as what is. One thing lighter than carbon fiber skin is the air that’s carefully directed around the monocoque via the intricate duct and scoop system. It starts up front with the flared nostrils and open-mouthed front-end underpinned by an adjustable splitter and doesn’t quit until hot air escapes through the dramatic X-shaped rear-end with centralized quad exhaust.

The Bolide sits just under a meter (3.2 ft) high, nearly 30 cm (12 in) lower than the Chiron and of equal height to the Type 35. A highlight atop that low roof, the prominent air scoop has a morphing skin that remains smooth at slow speeds but pops out into a series of bubbles when the car pushes faster. The inflatable bubbles cut drag while optimizing airflow to the rear wing to prevent the light, four-wheeled sliver of carbon fiber and titanium from taking off into the air like the Bell X-1 supersonic aircraft that inspires the X shaping throughout. Bugatti says the car develops 800 kg (1,763 lb) of downforce at the front wing and 1,800 kg (3,968 lb) at the rear wing when traveling 320 km/h (199 mph).

Of course, talk and simulations are cheap, and while it has spent some time on the track, there’s still no guarantee the Bolide will ever achieves those numbers. Bugatti hasn’t even decided whether the car will make the trip from experimental prototype to production car. We’re betting company phones have been blowing up with past and potential clients working to coax the project along the production path, though.