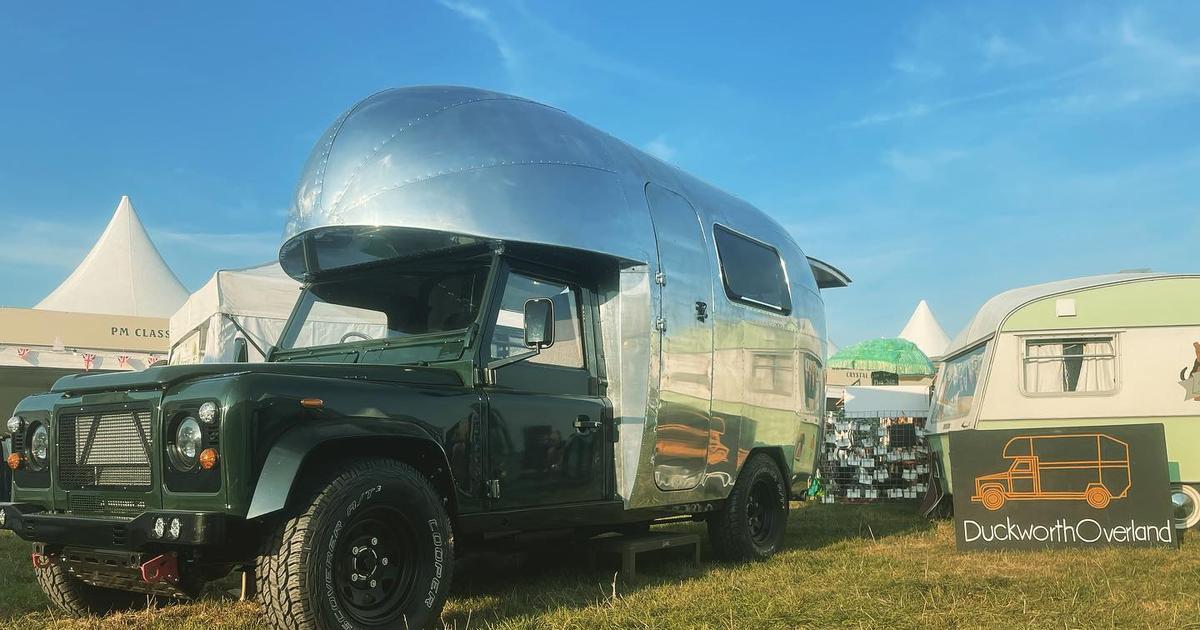 Ambitious British startup Duckworth Overland has set out to meld two of the most recognizable products in land travel: the Land Rover Defender and the Airstream/Bowlus-style aircraft-inspired aluminum camper. The resulting “Aerover” mini-RV, then, is something of an anomaly, a gritty, go-anywhere 4×4 complete with a tall, tree branch-snapping bulging zeppelin of an alcove motorhome shining brightly on its back. It’s an RV that demands to be seen, even when voyaging to places where there’s no one to see it.

A commonality we’ve noticed among both professional and amateur overland and off-road builders: no matter how perfect and amazing their final design is to the outside world, it never seems to quite scratch that innovator itch. If anything, it only irritates the itch, pushing them to begin conceptualizing their next creation well before finishing the current one.

That seems the case for Duckworth Overland founder Thomas Duckworth. While completing and traveling in the Lorry Life , a shed-based tiny home secured atop a retired Bedford MJ army truck, Duckworth became hooked on the experience of actualizing his imaginings into real-life off-grid adventure vehicles and experiences. From the looks of his follow-up project, it also seems he gained an affinity for equipping rugged, military-grade machines with spacious accommodations.

With the Aerover, sometimes called the “Air Lander,” Duckworth focuses his individual passions for overlanding and hands-on car restoration into a single project. A build like the shed-on-flatbed Lorry Life didn’t exercise Duckworth’s restoration skills, such as panel beating and English wheel metal shaping, but a British-meets-American combination of handcrafted Streamline Moderne motorhome and restored Defender certainly ticks every box, once, if not twice.

Duckworth quickly found a shared enthusiasm for his project with engineer, CAD designer and all-around outdoorsman Michael Gerrard, and the two started putting together the rather unlikely pairing behind the Aerover concept. The pandemic lockdowns and general slowdowns of 2020/21 helped create the time to start pushing the project from vision to marketable reality.

The Land Rover Defender TD5 130 van that served as Duckworth Overland’s starting point looks solid and clean enough from afar in photos, but zoom in closer and you can see it’s worn, bruised and battered … and that’s before you get to the roughness below the skin. Needless to say, Duckworth wasn’t about to meticulously coach-build a shiny, new motorhome on its back without some restoration.

The startup team stripped the Defender down to loose parts, replacing or restoring everything, beginning by swapping the original frame with a brand-new galvanized steel J.E. Marsland Defender chassis. It also reconditioned the diesel five-cylinder and gearbox, added a self-leveling air suspension with multiple ride heights, rebuilt the axles and differentials, added new disc brakes, swapped in a newer, reconditioned power steering box, and repaired and repainted the body, among numerous other replacements and restorations.

To create the “habitation pod,” Duckworth first put together a CNC-cut skeletal wood buck, which it used to form the aluminum frame and hand-shaped exterior panels. Once the alu skin and bones were complete, the wood pieces were removed from inside, allowing for the final assembly of the frame and body panels via the innumerable rivets that dot the polished shell.

The Land Rover and aircraft-inspired camper complement and contrast each other to spectacular effect. Few other earthly articles are as symbolic of freeing, self-guided travel as a Land Rover Defender and a classic 1930’s aluminum RV, and they come together to support that travel more effectively than either can do alone. On the other hand, few things look as distinctly different as the hard, curve-less face of the Racing Green Defender cab and the carefully streamlined, shimmering naked aluminum of the aeronautically inspired camper.

Duckworth completed the shell just ahead of a first showing at last month’s Goodwood Revival, building a temporary plywood floor and wood benches to deliver a better feel for the size of the space. The rest of the interior remained a skeletal balloon of shiny aluminum awaiting a full fit-out.

The Bristol-based overland shop ultimately wants to secure a buyer before proceeding with a customized interior build, but it has published some renderings and ideas of how the cabin might come together. Plans call for a highly modern setup that eliminates the need for LPG tanks with a powerful electrical system that can run the induction cooking, lighting, water pumps, and other appliances and equipment. A 200-Ah lithium battery will be charged via a 220-watt roof-mounted solar setup, vehicle alternator and shore power hookup.

The floor plan will ultimately be configured around the buyer’s input, but Duckworth intends to complement the kitchen block with a convertible dinette/primary double bed. A stowable portable toilet will be on offer, as will the option of a more complete bathroom compartment. The tapered nature of the big above-cab alcove means that it’s limited to storage or a smaller secondary bed.

Plans also call for heat, A/C, hot water and a second kitchen area for outdoor cooking. Duckworth is leaning away from the usual cheap plastic RV trim and toward higher quality interior materials like wood, bare metal and leather, which bring to mind the interior of another aluminum camper, the Lume Traveler.

We sent a pricing inquiry through Duckworth’s website but did not receive an answer before publishing. We will update if we do, but the final price will surely be heavily influenced by the customer-driven interior layout and equipment. According to its website and social media, Duckworth is eagerly looking for its first buyer, urging interested parties to message it for more information. After finishing Aerover #001, it plans to proceed with a limited production run.

We look forward to taking a look at the final product once the interior is complete.