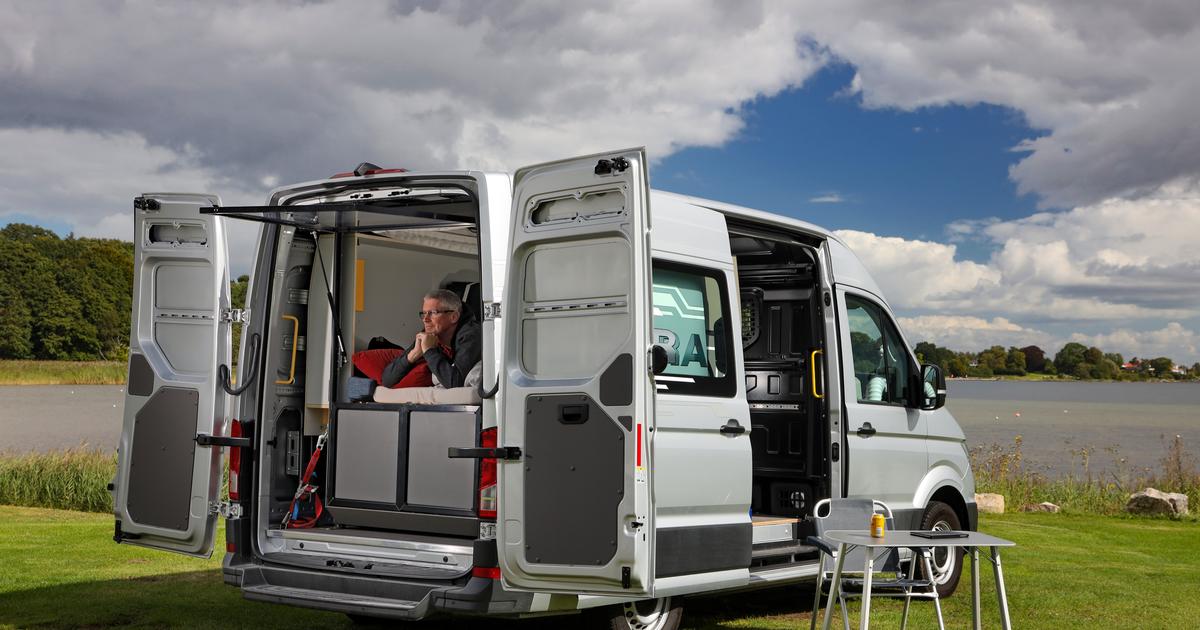 All-electric camper vans are still quite rare. Those that are available tend to be designed for camping and commuting locally, not road-tripping indefinitely. But VW fanatic Frank Eusterholz had different ideas. He threw a PlugVan camper module into the e-Crafter cargo van and hit the road … the long road. Eusterholz’s 7,500-km (4,660-mile) journey sent him highway-cruising, switchback-climbing and island-hopping across Europe, from VW van HQ Hannover, Germany to the northernmost tip of Continental Europe. His journey serves as an inspiring early look at the electric RVing possibilities that will only grow with time.

Electric camper vans have been available for years, but a practical version with enough range always seems just a few years off. Next-generation EV campers from the Rivian R1T overland truck to VW’s own ID. Buzz promise more practical ranges and capabilities, but for now e-campers remain limited to small, modest-range minis like the Sussex e-NV200 Camper Car.

In an announcement released last month, Volkswagen painted a different picture of electric camper van touring. It described the story of 54-year-old Frank Eusterholz, a longtime EV driver determined not to let the modest ranges of contemporary electric vans deter him from EV van life. A resident of Samsø, a Danish island that’s been committed to sustainable energy for decades, Eusterholz considered the e-Crafter a natural vehicle choice, and the perfect camper base.

It might be perfect for sustainable island living and camping, but the 173-km (108-mile, NEDC)-range e-Crafter still seems quite imperfect for a 7,500-km trip to the extreme reaches of Europe. That’s 44 charging stops baked in from the very beginning — just to get there, double it for the ride back. In fact, Eusterholz ended up making 95 charging stops total.

But the trip was planned as a journey, not a race, and Eusterholz was determined to combine his love of electric vehicles with his longtime goal of visiting Norway’s North Cape via camper van.

“Anyone can do it in a diesel after all,” he said. “I’m probably now the first person to have been at the North Cape with an electrically powered van/camper.”

The best way to optimize an electric camper van for a journey such as this one would seem to be to personalize the conversion, minimizing weight by equipping the van with the most basic comforts you’d require on the journey. But Eusterholz saved the time and headaches of such a ground-up conversion and opted instead for a unique plug-and-play solution.

The German-designed PlugVan is essentially a fully equipped camper conversion in a box that slides into a full-size van, instantly turning e-Crafter into e-Crafter camper van. The module expands out at the sides and roof to fit the specific van cabin dimensions and secures down via straps. A full camper van comes to life in mere minutes.

The PlugVan isn’t quite as cozy as a full-blown conversion, but it does provide a functional little studio apartment on wheels. With a series of sliding, folding and adjustable furniture, the top spec model fits in a convertible dual bench/bed, a kitchen with sink, stove and fridge, heating and A/C, an electrical system and a dining table. It even comes wired with a smart touchscreen command center complete with Alexa voice control. There’s no bathroom, but because the module doesn’t take up the full length of the van cabin, there’s plenty of room to pack a portable toilet and other cargo. It looks like Eusterholz did just that in the picture below.

After putting together his fast-convert camper van, Eusterholz set out in August and spent 18 days climbing his way north and back. The direct roundtrip from Hannover, to Samsø, to the North Cape and back ate up a 6,666 kilometers (4,142 miles), according to VW’s report, and Eusterholz pushed the total to 7,544 km (4,688 miles) with a few detours and side trips.

EV camping usually inspires a discussion centered around disadvantages, like limited range and frequent charging stops, but Eusterholz took the opposite approach and focused in on the upsides, stressing how an electric drive can actually enrich the experience of van touring.

“You slow down, drive in a more conscious way and, at the end of the day, are actually more rested when you reach your destination,” he said, adding that being in a camper van means you can enjoy a more relaxing break at charging stops.

Not all of the 95 charging stops were filled with afternoon tea or power naps, though. At one point, Eusterholz rolled into the only charging station in the greater area, mere kilometers left on the range display. Out of order. He had luck in finding a friendly town doctor who allowed him to charge up at his office, but it was a close call. He also dealt with excessively high prices and slow charge-only zones through certain stretches along the way.

We suppose Eusterholz’s optimism applies to running clean out of battery power, too. At least you have a place to spend the night (or weekend).

Eusterholz made it all the way to the North Cape and managed to meander off on a side trip up Norway’s famed Trollstigen, a steep but gorgeous ribbon of snaking, switchbacking mountain road. According to Volkswagen, Eusterholz started at the bottom with 100 km (62 miles) on the remaining range dial, depleted it down to 50 km (80 miles) by the top of the climb, but was then able to charge all the way back to 90 km (56 miles) through regenerative braking on the way back down.

Eusterholz was quick to confirm he would do the trip all over again. “In a flash, any time.”

Souls hardy enough to follow in Eusterholz’s kilometer-packed EV-touring footsteps will likely remain few and far between, and we don’t see Volkswagen building an e-Grand California until it has a more mass marketable electric van with extra range. But with vehicles like the ID. Buzz on the way, and self-powered camping trailers and chassis moving toward reality, it should only be a matter of time before EV camping starts growing.

The Mercedes EQV van seems itching for a camper conversion, as does the electric version of the wildly popular Fiat Ducato. Assuming no delays, the first Tesla Cybertrucks and Rivian R1Ts will hit the market around this time next year. From there, it should fast become an interesting time for EV camping.