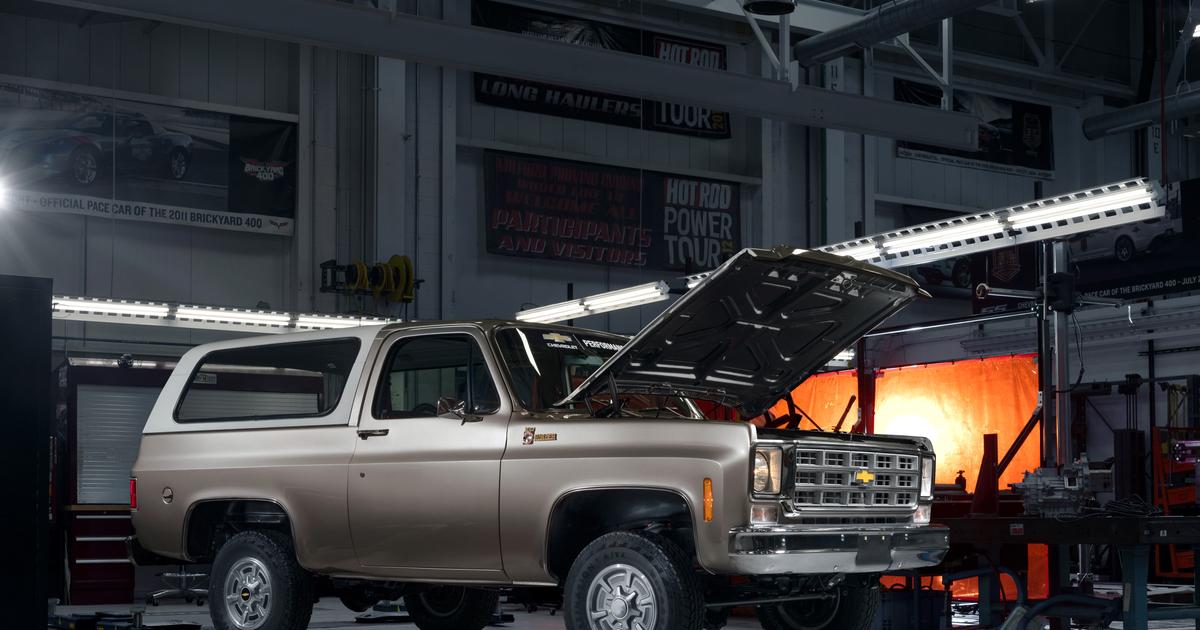 Ever since it revealed the show-stopping 700-hp eCopo Camaro at SEMA 2018, Chevrolet has been developing out its eCrate “Connect and Cruise” aftermarket electric drive. It’s now preparing for a 2021 launch and follows last year’s E-10 pickup up with another all-electric SEMA classic truck rebuild. The 1977 K5 Blazer-E looks like every other hard-nosed two-door K5 utility vehicle out there, but instead of a V8 grumbling away under its hood it relies upon a 200-hp Bolt EV-derived electric powertrain.

Along with tuned sports cars and modded pickups, re-lifed classic SUVs are a big part of SEMA, so it’s not too surprising to see Chevy reach into its own past and dig out a classic utility vehicle to serve as the next in line for eCrate treatment.

In building the project truck, Chevy attempted to keep as much of the original Blazer intact as it could while fully modernizing the powertrain with e-drive tech. It also tried to use as many production components as possible, stating that around 90 percent of the added parts are straight off the factory Bolt.

Obviously the parts of the Blazer that Chevy simply couldn’t keep started with the 175-hp 6.6-liter V8 engine. So it pulled it out, along with the three-speed automatic transmission, fuel system and exhaust, filling the empty space with the 200-hp Bolt motor and an electronically controlled four-speed automatic transmission from Chevrolet Performance. Along with the 200 hp, the duo sends out up to 266 lb-ft (360 Nm) of torque. Chevy left in place the original transfer case, driveshaft and axles.

Chevy installed the 60-kWh 400-V battery pack in the cargo area and carried over production Bolt EV features like battery heating and cooling, shock and overcharge protection, and even regenerative braking. Separate aftermarket add-ons include power steering hardware, an electronic controller to run updated instrument cluster operations like battery life, and an electric pump for the braking system.

The result: an all-electric 4×4 with chiseled 1970s looks … not a bad follow-up to the GMC Hummer EV.

The Blazer-E conversion directly previews the 60-kWh Electric Connect and Cruise package that Chevy plans to launch by the second half of 2021. In addition to the 60-kWh battery, the kit packages together the 200-hp motor, DC-to-AC power inverter for driving the motor, DC-to-DC power converter for low-voltage operations, and wiring harnesses, controllers and water pumps for heating and cooling.

Chevrolet Performance will also be certifying a series of dealerships and third-party installers. Each one will receive the training, tools and equipment necessary to work with the high-voltage eCrate hardware and charging stations. GM vehicle tuner Lingenfelter Performance Engineering will be the first to pilot the training and certification program.

The 60-kWh kit will be but a first step in Chevy’s grand aftermarket electrification kit plan. Chevrolet Performance is currently studying the possibilities for additional motor and battery configurations and will ultimately integrate Ultium battery technology.

Chevy will use this year’s SEMA360 show to survey potential eCrate customers ahead of finalizing the initial eCrate offering.

Like virtually every other auto show of 2020, the physical SEMA Show in Las Vegas has been canceled, reworked into the virtual SEMA360 show. It runs next week from November 2 to 6.