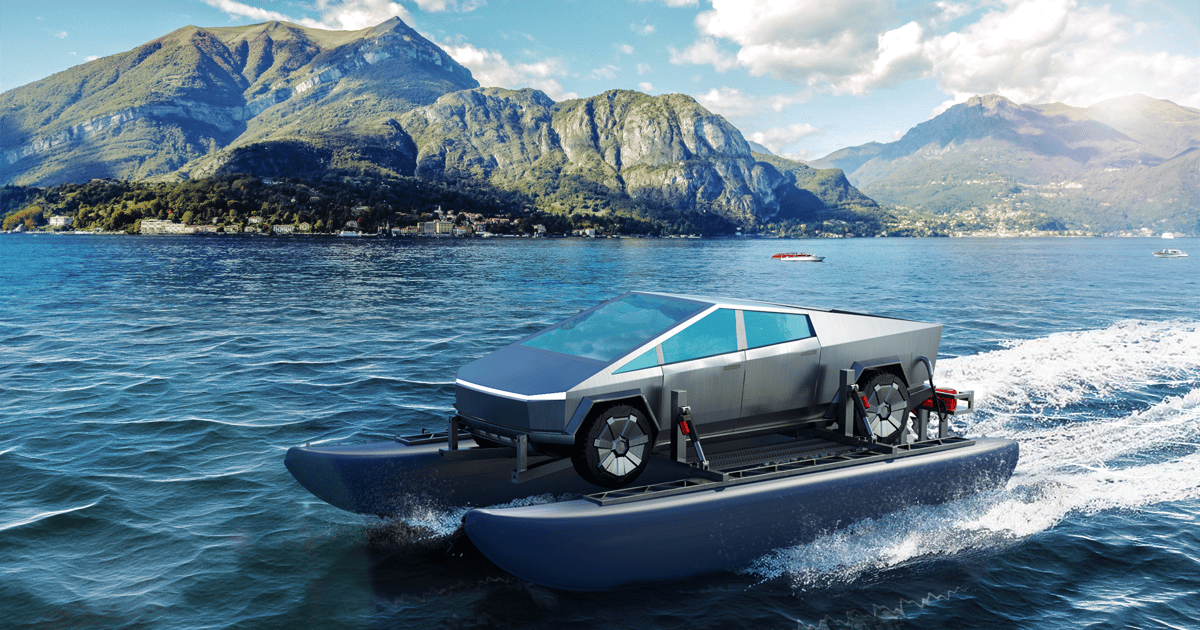 The weirdest pickup truck on the highway also promises to be the weirdest catamaran on the water, at least if a new set of accessories from a Seattle startup gets off the ground. The company imagines the truck that Musk built rolling its way into the water with a set of attachable pontoons, electric outboards and even a hydrofoil upgrade. And since the bed won’t be occupied by plywood or power tools, it can be put to use carrying additional recreational equipment and accessories, including a pop-up camper shell that makes the Tesla day cruiser an overnight micro-home for land and sea.

It’s fairly easy to hate on the Cybertruck’s unconventional design, but one positive thing that’s hard to deny is that it’s encouraged designers to get equally creative and unconventional in creating outside-the-box accessory ideas. One unlikely telescoping RV seems to be moving along quite well, and another RV promises to push electrified off-grid living to the next level of convenience. Cybercat has taken things in a different direction by transforming Cybertruck into Cyberboat.

Technically, the startup we’re speaking of is named TSWLM Electric Vehicles Inc, a play on Elon Musk’s infatuation with the submersible Lotus from The Spy Who Loved Me, but “Cybercat” is just so much catchier, we can’t imagine the company won’t adopt it the minute its product gets off the ground, assuming that ever actually happens. So we’re just going to call it Cybercat from the get-go.

Cybercat has imagined a kit of components based around a pair of inflatable pontoons and a multi-outboard drive. The entire kit would break down to fit inside the Cybertruck bed so that the pickup becomes a self-contained land/water vehicle, without so much as a boat trailer. The company says the amphibious chassis would install in less time than it takes to launch a boat, though that feels like a claim that’s easy to make when you’re dealing solely in renderings and not tangible components you have to wrench onto a truck in a real-life instructional video.

Once the kit is fully installed, the Cybertruck would drive into the water and through the shallows. When the water deepens, the pontoons and electric outboard motors would fold down via actuator jacks to get the whole rig floating and powering forward.

Folks looking for more speed would want to upgrade to the Foiler kit. By lifting the Cybertruck out of the water on a set of hydrofoils, Cybercat reckons that pickup captains could get the rig up to speeds of 35 knots (65 km/h). It doesn’t budge from its 100-nautical mile/5-knot estimate, but it does suggest that the vessel could get a little farther while cruising a little faster compared to the Cybercat, traveling up to 65 nautical miles (120 km) at 22 knots (41 km/h).

The Cybertruck bed isn’t quite the full deck that boaters are used to, but Cybercat imagines dropping the tailgate and putting it to good use as a sundeck, diving platform or even a fishing boat with the addition of seats and rod holders. Add a basic camper shell or a pop-up pickup camper, like the one Tesla envisioned way back when, and your day truck-boat becomes an overnighter. Forget #vanlife; live the #amphibiouspickuplife.

As for why you’d want to use your Cybertruck as both pickup and boat, Cybercat’s idea seems to be to enjoy a quiet, emissions-free experience on land and water, without paying for two independent vehicles. Estimated Cybercat pricing lands between US$22,900 and $32,900, depending upon motor configuration. The Foiler would run $35,400 to $42,900, if we’re to believe Cybercat’s way-too-early estimates.

There’s certainly something to be said for the Cybercat’s open-ended versatility, and it’s certainly a cheaper proposition than buying a Cybertruck and something like the Candela C-7 or C-8, but if the Cybercat ever does materialize as an available product, we’d shop it very carefully against a more modestly priced electric boat, like the unimaginatively named Electric Pontoon Boat. Or we’d skip the boat entirely and use the comparative savings to justify an impractical toy like the Fliteboard.

Cybercat admits that its journey to market won’t be easy, and it will have to convince automotive OEMs to get on board if it has any hope of developing the amphibious kit it’s imagining. So there’s more than a good chance that we won’t hear about this project again. But we would have never expected a questionably designed telescoping pickup camper for a truck that’s still under development to ring up a purported $100 million in preorders, so maybe there is hope for an amphibious Cybertruck.

You can check out the FAQ section at the lower part of the Cybercat landing page linked to below for more information about how the company hopes to proceed around the obstacles it faces. To its credit, it’s not (yet) taking deposits on what could very well become pure vaporware.