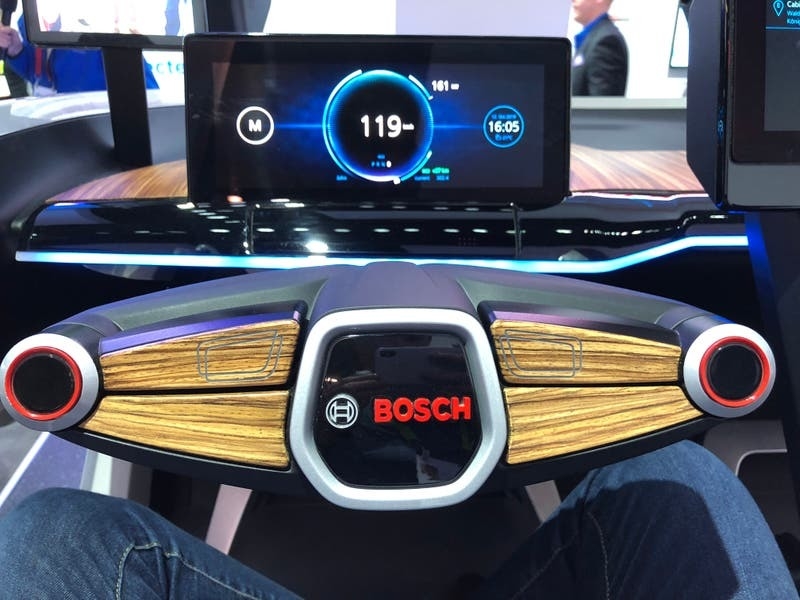 The evidence mounting on the show floor of CES suggests that very soon cars will not just be modes of transport, but entertainment and lifestyle hubs.

The industry seems unanimous in its verdict that this will involve elements of autonomous technology, but the further potential for future cars is still be explored.

Some of the most interesting suggestions come from a source you might not necessarily expect – Bosch – traditionally more likely to have built your washing machine than your next car.

But it’s first worth spending a bit of time appreciating some of the cool things Bosch have come up with as part of its concept user interface.

It centres around a range of displays in the cabin, the most prominent of which replaces the traditional centre console.

Thanks to a partnership with gesture control firm Ultrahaptics, users are able to make gestures in mid-air, in a sweet spot over the centre console, in order to move through the car’s interface.

The technology at work uses ultrasound to detect movement, but haptic feedback is also at work within the screens themselves.

These have been designed to over subtle vibration feedback when the user runs their hand over a button – the idea being that should the driver need to interact with the display, they will know where to press without taking their eyes off the road.

The technology is also able to communicate with other smart devices – including smart home appliances, which can be controlled from within the car.

Bosch’s concept suggests being able to set the heating before you arrive home, or closing windows on your home automatically from the car if you forgot to do so before you left.

But there are more car-centric scenarios too, for example not just alerting users when the electric charge is close to running out, but also instantly offering up routes to the nearest charging station.

Interesting ideas – but crucially just ideas. Until now. At CES this year, Bosch has brought its concept car cockpit back, but also a Cadillac and an electric BMW i3, two cars which are beginning to implement some of Bosch’s concepts.

Both are just concepts for now, but it’s a sign Bosch is making ever bigger waves in the automotive market.