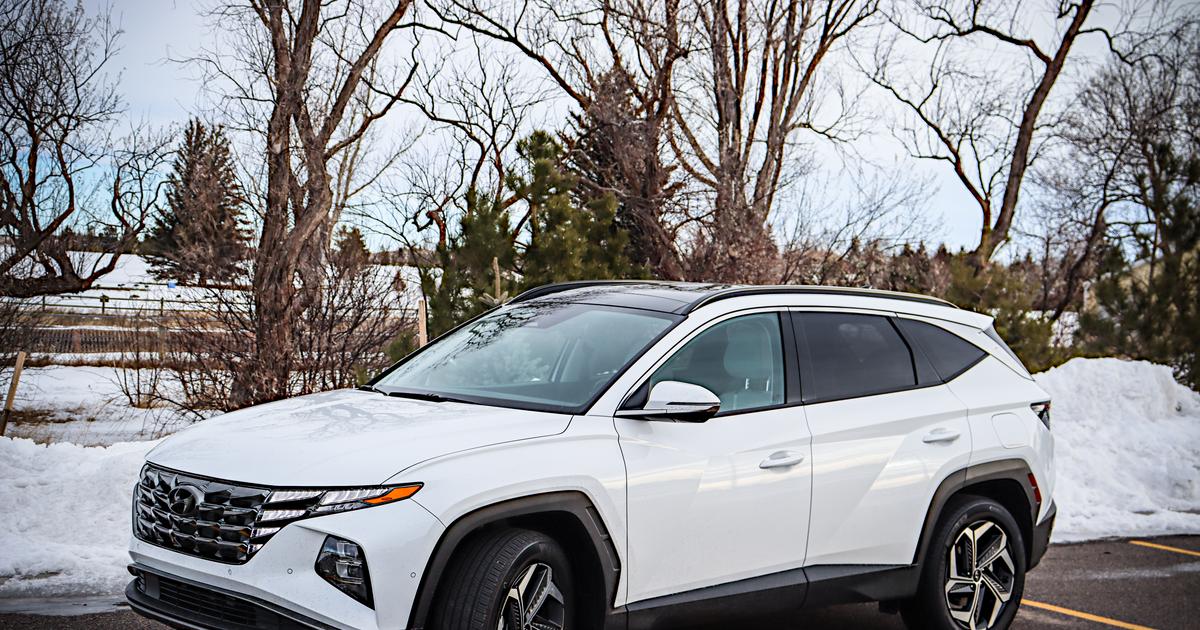 Hyundai’s small two-row crossover has been newly-redesigned for 2022, bringing some dramatic changes including a far more eye-catching exterior, a more dynamic presence, and two hybrid options alongside conventional gasoline.

Hyundai’s new design language is bolder and more upmarket, a sign of the way the company is rebranding itself. This is most evident in the fourth generation Tucson’s squared wheel arches, a trapezoidal grille that morphs into cascading headlamps almost seamlessly, and the near-clamshell hood with strong cut lines atop. The bodywork has busy cuts and angles that are, individually, quite alarming but which come together to create a sense of forward movement and a strong statement at a time when many vehicles in this competitive segment are fighting for attention. Unlike a couple of its rivals, though, Hyundai has managed to not go over the top with its look here.

There are three powertrain options for the 2022 model. The base engine is a 2.5-liter four-cylinder engine that produces 187 horsepower (139.5 kW) – on a good day, downhill, with the wind behind you. Most of the time, it’s sluggish and not very confident. Luckily, the standard hybrid provides a more likeable 1.6-liter turbocharged four with 227 horsepower (169 kW) of output (when combined with the electric motor). It could be argued that it’s all in the transmission, but the hybrid actually loses two gears, going from eight to six, so that’s not likely. That same 1.6L turbo engine, and a more powerful motor, are found in the plug-in hybrid option, which jumps to 261 horsepower (194.5 kW).

Fuel economy is another area where the three Tucsons differ greatly. The standard engine is good for 29 mpg (8.1 l/100km) on the highway. That’s only just average at best in today’s market. The hybrid upgrades that to 37 mpg (6.3 l/100km) on the highway (upper trim level, all-wheel drive), which we verified in our own highway test loop. That’s a much better, though not amazing, mpg return. Those not needing AWD or higher-end amenities can get an extra MPG from the base model hybrid Tucson, while the PHEV is rated at 35 mpg (6.7 l/100km) combined.

Where the standard gasoline-powered 2022 Tucson comes in four trim levels, the hybrid models come in three. The hybrids essentially skip the base model Tucson SE and go directly to the SEL (called the “Blue Hybrid”). Standard features are pretty plentiful, though, including a full suite of active safety systems and driver’s aids. These include driver attention warning, forward collision mitigation, rear-seat reminder, lane-keeping assistance, blind-spot monitoring and intervention, and adaptive cruise control. Other amenities like wireless Apple CarPlay and Android Auto, an 8-inch infotainment screen, proximity keyless entry, heated front seats, heated side mirrors, USB ports in both the front and rear passenger areas, and so forth are also included. Extra goodies are added from there based on the trim levels.

The difference in drive quality between the Tucson and the Tucson Hybrid for this 2022 model year is startlingly. Where the standard gasoline model is often sluggish and disinterested, the turbocharged hybrid is quick and engaging. The added balance the batteries bring to the vehicle’s dynamics (a truism for most hybrid models of any make) only adds to the appeal. While not a sports car or twisty road fun machine, the Tucson Hybrid is enjoyable as a daily drive.

Inside the well-designed Hybrid isn’t austere for minimalism’s sake, as with some luxury brands, but it feels like quality without a lot of fuss. Twin lines run along the edge of the dashboard, creating an encirclement around the driver and the front passenger with the infotainment and center stack dividing them. The infotainment screen and interface is good, with bright feedback and easy-to-understand menus. Our chief complaint, however, is that the buttons are sometimes not responsive due mainly to their virtual size being larger than their read area. If not touching the center of the icon, it is as likely as not to ignore your input. The screen, because of its position, gets smudged easily. A slight downward cant (the usual in today’s vehicle designs) would remove much of that annoyance by changing the reflection angle.

Otherwise, the interior of the 2022 Tucson Hybrid is comfortable, well-appointed, and spacious. Seating for four is prime, with lots of room to spare. Adding a fifth to the back seat is a bit of a squeeze, but that’s true of all small SUVs like this. Cargo space is large at 41.3 cubic feet (1,169.5 liters), which opens to 80 cf (2,265 liters) when the rear seats are folded. That’s class-leading at this point.

In all, our impressions of the 2022 Hyundai Tucson Hybrid are good. With a starting price of about US$31,500 for the Blue Hybrid base model (versus about $30,000 for the gasoline SEL), it seems that the “hybrid premium” here is slight – especially given its better drive quality and almost 10 mpg improvement on the highway. While Hyundai has not announced a battery-electric version of the Tucson yet, the Ioniq 5 EV is comparably sized and enters the market this year.

Update (Feb. 25, 2020): This article originally stated “both the standard gasoline and the hybrid use the same six-speed automatic.” This was incorrect – the hybrid has an eight-speed transmission and the non-hybrid has a six-speed, and the article text has been altered to reflect. We apologize for the error and thank the readers who brought it to our attention.