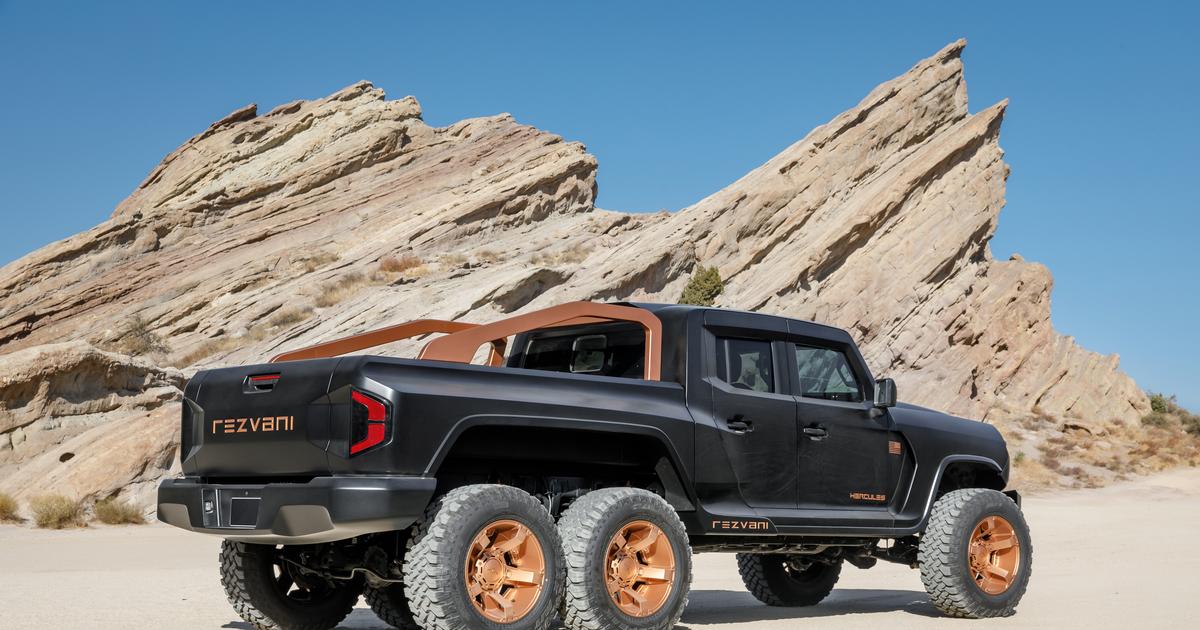 We’re not sure any person in history ever looked at the bullet-shielding, smoke-spewing Rezvani Tank XUV (xtreme utility vehicle) and thought it needed just a little more work. But Rezvani has been going that direction anyway, pushing the “xtreme” factor up with a military-grade version and hyper horsepower. Now, it blows the back off the Tank and rebuilds it into the Hercules 6×6, a go-anywhere pickup that makes no attempt at hiding its extra drive axle, capped at the ends by the pinkish hue of bronze-finished wheels.

This particular Hercules owes its existence not to Jupiter but to the badges within Fiat-Chrysler. The truck trades the Jeep Wrangler base of its little brother for the Gladiator before getting the transformative body kit that makes it a Rezvani XUV. Traditionalists might call blasphemy in toying with the ageless face of the Wrangler/Gladiator, but those looking to stand out on the trail should appreciate the thorough disguise.

When it comes to power, Rezvani rummages around the Dodge and SRT parts bins to pull out none other than the Dodge Demon’s 6.2-liter supercharged V8. Fearing the usual 840 hp would give the 244-in (620-cm) Hercules a complex when standing next to the 1,000-hp Tank X, Rezvani increases the bore and stroke of the engine for 7.0 liters of displacement, adds on a Forged stroker crank and pistons, puts the Demon supercharger back on, and pushes available output well beyond the hypercar threshold to somewhere above 1,300 hp and 989 lb-ft of torque. The engine gets mated to the meaty eight-speed TorqueFlite automatic transmission from the Ram 1500 TRX.

Those that might find running a 1,300-hp engine in their massive six-wheeled truck overkill can opt for three humbler options, including the Gladiator’s 285-hp 3.6-liter Pentastar V6 or 260-hp 3.0-liter V6 turbo-diesel. The other choice is SRT’s 500-hp 6.4-liter Hemi V8.

Whatever engine the driver chooses, it’ll be powering an extra Dana 60 axle. Rezvani extends out the steel ladder frame to accommodate an extra set of wheels below the huge rear arches. Drivers can select from 6×2, 6×4 and 6×6 drive modes, depending upon what’s confronting them ahead of the windshield. The build includes air lockers at the axles fed by an air compressor.

The Hercules doesn’t follow in the footsteps of the similar Mercedes G63 AMG 6×6 in sporting portal axles, but its combination of specially prepared Fox racing suspension and 37-in tires give it plenty of height.

Up above the dual rear axles, Rezvani plants on an 8-foot (2.4-m) bed capable of hauling all kinds of tools and cargo. Buyers can customize the sport bars in various finishes; the bronze here matches the wheels.

The exterior is the real showstopper, but Rezvani also does some work on the interior with Napa leather, custom stitching and suede trim.

The Hercules 6×6 starts at $225,000, something of a bargain compared to the prices of the G63 6×6 or Hennessey Goliath, but we’re thinking many buyers sliding into this truck will be upgrading to the $325,000 Military Edition. What good’s a blacked-out six-wheel hyper-pickup without bulletproof armor, underbody explosives protection, military run-flats, a survival kit complete with gas masks and a smokescreen-deployment system? And no worries … the 1,300-hp Demon V8 is an option on the mil-spec version, too.